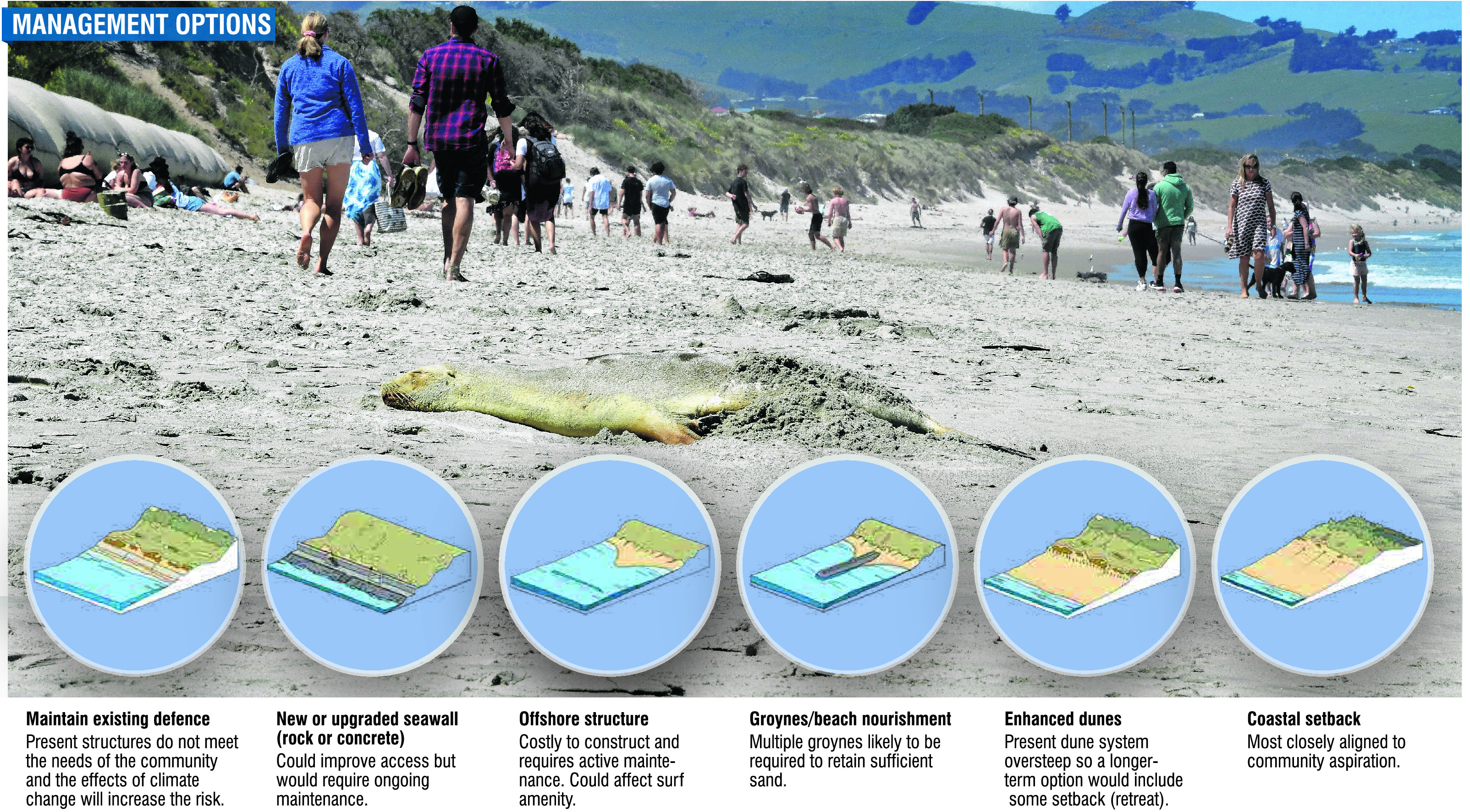 Some retreat from Dunedin’s coastline is emerging as a favoured long-term approach for managing the beach between St Clair and St Kilda.

However, engineering work will be needed in the short term.

Broad approaches and options for management interventions have been outlined in the draft plan for the coast between St Clair and St Kilda, which was released for public feedback yesterday.

The plan signals the part of the coastline most urgently in need of attention is beside the old landfill under Kettle Park, at Middle Beach.

Old materials there are at risk of being exposed by erosion.

Middle Beach has been identified as the area that will likely first need to depart from existing approaches, described as temporary fixes and largely reactive.

The plan described four high-level management approaches for the coast between St Clair and St Kilda and two appeared to be unsuitable — simply allowing nature to take its course or carrying out works to push the coast seawards.

One approach was called ‘‘coastal setback’’, described as undertaking works to accommodate coastal processes and allowing the sea to move landward.

‘‘We are not suggesting that the entire stretch of coast needs to be set back soon, but rather that in time some form of coastal setback is likely to be of value,’’ the draft plan stated.

‘‘The coastal setback approach most closely aligns with the vision and management objectives established in this plan and offers the best option to develop a natural and resilient coast for the long term.’’

An approach labelled ‘‘hold the line’’ would be needed in places, at least in the interim.

‘‘This approach potentially commits to a future of maintenance and engineering work, but could meet the needs and aspiration for improved access and amenity over a shorter time scale.’’

There would also be ongoing monitoring and modelling to help shape longer-term management decisions.

Management options have been critiqued in the draft plan.

Existing defences ‘‘do not meet the needs of the community and the effects of climate change will increase the risk’’.

A new or upgraded seawall at St Clair could improve access, but would require ongoing maintenance and upgrades.

Offshore structures could be costly to construct and could affect surf amenity.

Multiple groynes might be needed to be effective in retaining sufficient sand.

Importing sand to replenish beaches could be expensive and disruptive.

Enhancing dunes would support resilience, but some retreat would be needed.

Coastal setback, considered to be the approach most closely aligned with community aspirations, would allow more space for the coast to respond to natural events.

However, it would require changes to land use and substantial lead-in time to implement.

Dunedin Mayor Aaron Hawkins said the draft plan had been shaped by extensive community engagement and input from technical experts over the past two years.

‘‘How the coast is managed in the future ideally needs to align as closely as possible with how people value the space and want to use it.’’

Could they not think wider and consider the ecosystem of alluvial materials from mountain to sea and coast. They have put dams on the Clutha and stop the natural flow of rock to sea bed and shore. They need to open this natural cycle of alluvial material up and re-allow the replenishment of the coastal sands and sea-bed.

Seriously, why should the Council give any weight on the publics ill informed views? On that note why would Council listen to one of their experts in isolation for such a significant project given the St Clair seawall has had multiple reports and designs (costing hundreds of thousands each time and paid for be Mr & Mrs Ratepayer) written by experts, and everyone one of these has failed? #fail

We have a greens council and DCC is riddled with greens aligned staff. One of the greens main thoughts is due to global warming the sea will rise. This rise is conjectured to be from a centimenter up to a meter or so.
The greens are convinced that the entirety of the reclaimed land in South Dunedin is going to be under water any day now.
So we wind up with a pathetic, miserable plan that takes the cheapest way out to abandon a few sports ground to the sea.
Groynes might be needed. Land may be abandoned. New Dunes might be created. All wishy washy platitudes with no real planning in this document.

Come on DCC and greens councillors. Did the ODT actually get it right with the last Aprils fools day plan of a sea inlet on the Forbury Park site?

Actually the sea level could go up 70m approx. when all the lans d ice would melt. Moana pool would become the new salt water pool. Exciting!

I still go back to the surfer dudes who came up with a plan to put an artificial reef off St Clair beach years ago.

While it was suggested mainly for enhancement of the surf break, it also had a secondary purpose; to stop sand erosion at St Clair beach. This was (of course) rubbished by the powers that be at the time and surfer dudes were basically told they were smoking too much marram grass.

Said surfer dudes exported their idea and set up their artificial reef in Wales of all places, where, funnily enough, the project did what they said it would do. As far as I'm aware and I haven't checked up lately, one of the sand filled reef sacks did burst, however, it was replaced and the benefits of having their idea accepted are still bringing rewards to the Welsh community where it was installed.

Now I'm not sure whether it's been looked into by the "powers that be" in the present time, but surely this idea deserves some investigation. Spending millions on "consultation", only to wave the white flag and run seems to be ridiculous ... but then again, I suppose you can't expect too much from the "powers that be" can you ?!

Oh dear! - We don't want to spend the money on the seawall, but we do want to make lots of lovely dosh consenting and permitting massive residential redevelopment at Forbury Park. The Dave Cull era 'Sinking South Dunedin' concept having been hurriedly buried (below the water table) to facilitate this process.

The problem with just letting go is that, while it's cheap, you don't know (quite literally) how far you will end up going, and Forbury Park is not all that far out of the frame of the retreat pictures supplied with this article.

So logically and responsibly, if the DCC opt for a 'yes' for the retreat, then they cannot also say 'yes' to the the repurposing of Forbury Park for residential use.

But I have a strong suspicion, based upon past performance with regard to logic and responsibility that our councillors will say "Yes, yes, yessety yes!" to both of them.....leaving the bill for defence/relocation of said Forbury expansive seaside villas or noddy house developments to be picked up by future ratepayers.

I was under the illusion that surfie dudes didn't want the off shore reef after the calamity at Mt Manganui where a newly installed reef ruined the surf break. Until ones in place our coast is so dynamic that you would never quite know how it might work. In principle I support it.
The relinquishing of the playing fields is an absolute priority. Returned to stable sand dunes with a terraced berm facing the sea will by itself repair much damage, enhancing the beach front sustainably. The toxic materials under much of it urgently need to be removed.
Constantly frustrating that so many boomers who comment here invariably just see it as an opportunity to fire salvos at the DCC. If you are so informed and so correct why not stand for council and make a difference. Fat chance!