But a University of Otago researcher cautions against the urge to "retreat" from an incoming sea. 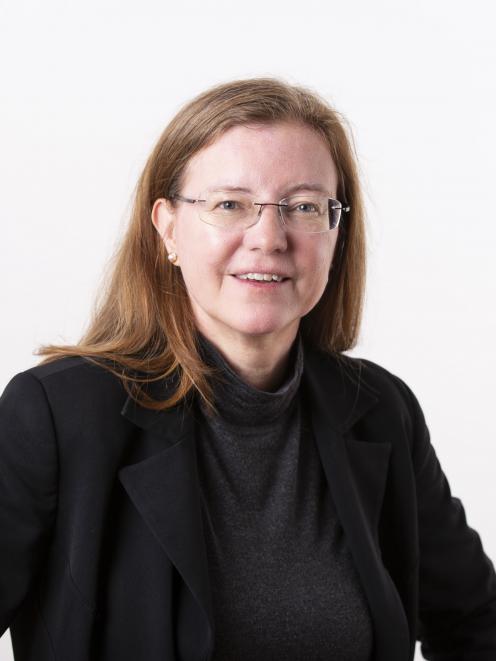 Prof Lisa Ellis University of Otago philosophy, politics and economics programme director: "There are lots of important decisions we should be making collectively about how to deal with a coastal future — none of them is to maintain status quo, because we don’t have that option." PHOTO: GRAHAM WARMAN

Reports from the Beehive address a managed retreat from coastal areas threatened with inundation; researchers describe a cascading series of insurance-driven financial and infrastructure retreats that will occur before storm surges regularly inundate coastal land.

However, University of Otago philosophy, politics and economics programme director Lisa Ellis said the concept of a retreat could be harmful when communities looked for equitable solutions.

The word retreat unnecessarily scared people and made them think they were out of options.

A retreat sounded like some distant authority was making the decisions that affected local communities, Prof Ellis said.

"There are lots of important decisions we should be making collectively about how to deal with a coastal future — none of them is to maintain status quo, because we don’t have that option," she said.

There might have to be a change in the way coastal areas were used over the rest of the next century, she said, but there were alternatives other than simply abandoning the land.

For example, in some places wetlands, or athletic fields, could provide a community with benefits, and could also withstand increased flooding better than built structures.

In Dunedin there was pressure to increase the housing supply and pressure to be responsible about future flooding expected in coastal areas not yet developed.

But cities needed to address the problem of adapting existing communities such as South Dunedin that had dense networks of valuable social and community ties — institutions like schools and also clubs and neighbourhoods.

Globally, flooding had already made decisions for communities before the questions had been adequately raised.

Hurricane Katrina slammed into the American city of New Orleans in 2005.

The storm surge caused 53 levee breaches and left a reported 80% of the city flooded.

The city’s neighbourhoods were "just blasted", she said.

And people were scattered.

Not only did they lose their homes, they lost their communities, and those communities were not put back together, she said.

"And New Orleans was smaller, and richer, and whiter," Prof Ellis said. "It was a different city and nobody made that decision deliberately. 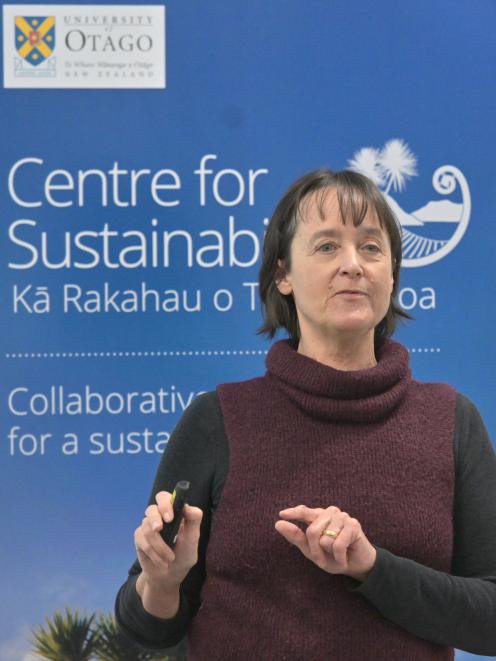 Associate Prof Janet Stephenson University of Otago Centre for Sustainability director: "It is increasingly important that something is put in place, because these people are blameless, and could be suffering hugely." PHOTO: LINDA ROBERTSON

"I think New Zealand has a real shot to make these decisions deliberately and to think about what the values are, and so, get ahead of the game."

University of Otago Centre for Sustainability director Janet Stephenson said a recent rough estimate by LGNZ showed, nationally, council infrastructure exposed to foreseeable damage due to rising sea levels increased sharply at each increment of sea-level rise. Across New Zealand, $7.1billion worth of council-owned infrastructure was exposed to flood damage at 1.5m of sea-level rise.

But those assets did not include community assets such as schools, parks, or libraries, Prof Stephenson said.

Further, while there were some people who continued to invest in parts of Dunedin in coastal flood zones, despite a growing body of evidence, those who bought there a long time ago, before the science was clear, should not be held responsible for investing in an area at a time when the exposure to sea-level rise had not been known.

And yet there were no arrangements at present that made it clear whether there was any assistance for people in those situations, she said.

"It is increasingly important that something is put in place, because these people are blameless, and could be suffering hugely," she said.

University of Otago PhD candidate Benjamin Tombs said New Zealand had a history of collective responses that offered insight into the issue.

Both the Earthquake Commission, and New Zealand’s Covid-19 response emphasised a collective response, he said. 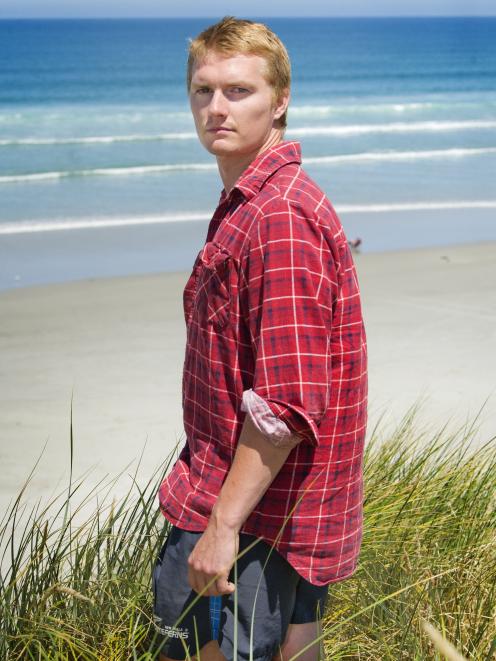 Benjamin Tombs, University of Otago PhD candidate: "New Zealand is a very unique landscape when it comes to natural hazards and a sense of collective responsibility." PHOTO: CHRISTINE O’CONNOR

There were lessons learned, both good and bad, from both.

"New Zealand is a very unique landscape when it comes to natural hazards and a sense of collective responsibility," Mr Tombs said.

"How can we, team of 5million, get over this series of losses that are foreseeable and are going to happen due to sea-level rise?"

But nevertheless, the 1-in-100 year events that happened in South Dunedin in 2015 were expected to now happen much more frequently.

People living in those flood zones were in a "property purgatory".

They could feel stuck in coastal properties they did not necessarily have much choice or ability to get out of.

And how New Zealand responded to the future inundation of its coasts remained unknown.

"It’s all just very ambiguous at the moment and that’s very immobilising," he said.

Ms Storey’s research predicted a relatively small increase in sea-level rise would cause at least partial insurance retreat for the vast majority of properties in coastal flood zones within just 15 years.

She said there was reluctance from some parts for her work to be undertaken, on the assumption that when it was published, house prices would fall.

But even after a disaster property prices bounced back very quickly.

South Dunedin, she said, presented a very difficult problem because it was not a strip of coastal homes but almost an entire suburb.

And though a typical response to the increased exposure to flooding was to "harden the coasts", she said, it would not work.

Engineering solutions like sea walls, stopbanks and levees would only delay damage at best.

At times, hard solution were even counterproductive, as they aggravated the effects elsewhere.

She said she firmly believed New Zealand needed to talk about how to move out of hazardous locations rather than how to mitigate the exposure to a rising sea.

"Measures taken to defend property are only short-term solutions," she said. "They don’t eliminate the risk; the reckoning will come."

The UN have just released a report that covers this subject. The UNEP Adaptation Gap Report 2020 finds that while nations have advanced in planning, huge gaps remain in finance for developing and bringing adaptation projects to the stage where they bring real protection against climate impacts such as droughts, floods and sea-level rise. With the poorest people set to suffer the most.

"Public and private finance for adaptation must be stepped up urgently, along with faster implementation. Nature-based solutions – locally appropriate actions that address societal challenges, such as climate change, and provide human well-being and biodiversity benefits by protecting, sustainably managing and restoring natural or modified ecosystems – must also become a priority."

New Orleans (Treme) is not 'White'. It only looked that way because no white looters were arrested.

Is that what you learn't at university eh.

New Orleans' affected areas were under sea level. South D, has areas at 1-3m above. 2015 flooding in South D was due blocked pumps/mud tanks where planned maintenance was skipped because the contractors were lazy and the DCC checking their work never bothered to do what ratepayers expected of them. Can someone publish a simple photograph of 100 years ago high tide vv today's levels (king tide vs king tide)? That will silence many; reality vs "academic scientists" trying to out do Al Gore's flooding of New York by year 2000......I say let the buyer beware to where they purchase their house. No one forced one to buy beside a river, or flood plain or ocean.

There's a comprehensive analysis of the sea level changes in NZ in the form of the Master of Science dissertation by Theresa Cole of the University of Otago, which can be downloaded from the internet. Her conclusions do not support the acceleration of the rate of sea level rise.

Why persist with the apocalyptic scenarios by the sociologists, philosophers, "climate economists" and such like then? Are they really the right people to pontificate on this particular topic?

Where is the actual hard evidence of sea levels rising in Dunedin?? Havong lived here 50 odd years all the rocks and coastlines look exactly the same!!
And if our so called leaders believe in sea levels rising so much, why are they building a Hospital where they are and cycle lanes all round the coast which will disappear under the sea.
And yes i know there are those scientist's who prompt this, but there are plenty who disagree.
And I agree stop using poor maintenance as a climate change sign, people are not completely stupid yet.

Sea level rise at specific locations may be more or less than the global average due to many local factors.
From tide gauge data, a linear trend of 1.7 ± 0.2 mm/year sea-level rise was found for the period 1900 to 1990 and a linear trend of 2.8 ± 0.8 mm/year for the period 1990 to 2009.
Trend analyses of regularly updated satellite data can be viewed at the NOAA site [4] for global and regional sea-level changes around the world.
Even after correcting for the effect of glacial isostatic adjustment, substantial regional differences in sea-level rise occur [5]. Major causes are:
self-gravitation related to changes in land ice mass, and elastic solid Earth deformation;
changes in seawater density (mainly related to fresh water input and water temperature), in ocean currents and in the atmospheric pressure distribution.
There is hardly any doubt that the global sea level has risen faster during the past decades than in the past century. While sea-level rise is estimated at 1-2 mm/year during the past century[1][6], the estimate of the present sea-level rise (2019) ranges between 3 and 4 mm/year, with an acceleration rate of 0.12±0.07 mm yr-2 [1] [7][8][9].