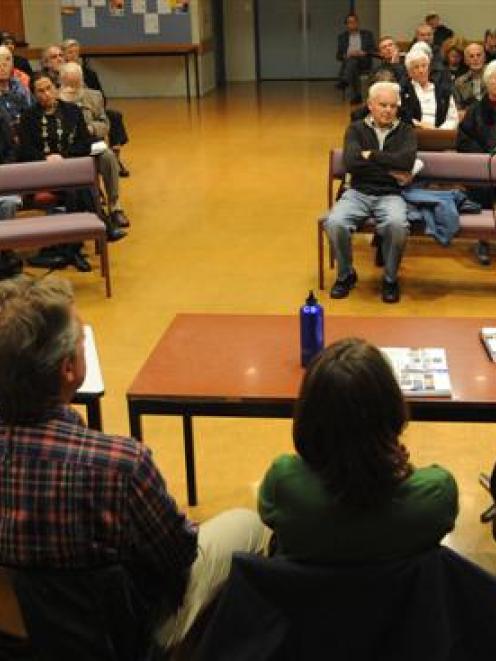 Mayor Dave Cull addresses members of the Dunedin Ratepayers and Householders Association at a public meeting in Burns Hall last night. Photo by Peter McIntosh.
Concerns the Dunedin City Council has not done enough to cut spending in the wake of the debt taken on by spending on Forsyth Barr Stadium and other projects, were aired at a Dunedin Ratepayers and Householders Association meeting last night.

About 45 people attended the meeting at Burns Hall, where Mayor Dave Cull and council chief executive Paul Orders, along with Crs Lee Vandervis and Jinty MacTavish, spoke about the council's draft annual plan and answered questions from the audience.

Association chairman Lyndon Weggery said the biggest issue facing the council was the level of debt, which had spiralled out of control to $602 million, when council company debts were included.

"It's hard to believe it got so high," Mr Weggery said.

He went on to say the council owed ratepayers an apology for the "long sad history" in the way it consulted the public over spending on the stadium.

"Such a gesture would go a long way," he said.

He applauded the council for the spending reduction it had made in getting the projected 2012-13 rate rise down to 5%, but asked why further reductions and a 3% rate rise could not be achieved.

Mr Cull said the council had done a brilliant job in reducing the projected rate rise from 11.9% to 5%.

Mr Orders said the "crucial issue" for council was striving towards "operational efficiency", which meant reviewing the provision of services.

Several audience members asked questions about the level of debt. One accused the council of taking on extra debt as a way of delivering smaller rate rises.

Mr Cull reminded the audience the council had inherited a difficult situation and was trying to turn that around.

Cr Vandervis told a questioner the council's best cost-saving options were to become a unitary authority and amalgamate with other councils, slash staffing numbers and drastically reduce stadium costs.