Jamie Burns (left) and Jarrod Michelle pleaded guilty to the burglary of St Dominic’s Priory. PHOTO: ROB KIDD
A Dunedin trio trashed and flooded a historic building during three hours of wanton destruction during lockdown, a court has heard.

The 76-year-old custodian of St Dominic’s Priory in Smith St told the Dunedin District Court yesterday he had lost irreplaceable keepsakes and filled three skips with damaged items during the clean-up.

Jamie Robert Burns (23) was previously sentenced to seven months’ home detention over the break-in, while his co-defendant, a 25-year-old first offender, was given diversion.

The last of the three, the youngest, appeared in court yesterday after pleading guilty to the burglary as well as two charges of intentional damage, two of speaking threateningly and one of breaching community work, committed while on bail.

Jarrod Michelle (22) was jailed for 23 months by Judge Michael Turner.

The defendant had no home detention address to offer but even if he had, such a sentence would not have been appropriate, the judge said.

On March 30, just days after the Alert Level 4 lockdown was imposed, the three defendants entered the lower level of the priory.

They broke into caretaker Maxim Lowrey’s apartment on the upper levels, then the destruction began.

The men used golf clubs to smash artworks, recorded by Burns on his cellphone.

Mr Lowrey told the court he was "blown away" when he returned to the property. 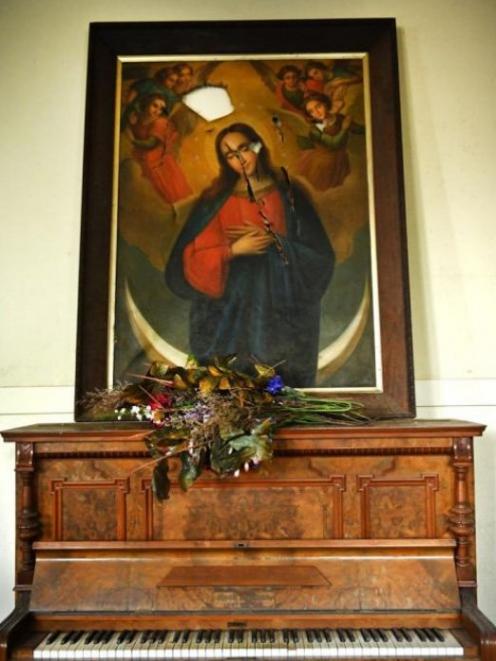 "I couldn’t believe what I saw," he said.

Furniture had been toppled, glass smashed, his microwave had been thrown across the room, covers had been ripped from books, a coffee table had been smashed, but most saddening was that items of immense sentimental value had gone.

A Leica camera and lenses, a commemorative glass globe and Waterford crystal glasses with his family crest on them had all been stolen, as well as his address book containing all contact details for friends and family.

And it got worse. The drunken trio had plugged a sink and bath with clothes and left taps running, leaving the property flooded.

"It’s my job to keep the priory safe and watch over it. I felt like I’d let the side down," Mr Lowrey said.

In July, he fell out with a friend and subjected her to a torrent of abuse by phone.

"I’ll slice you and your kids into little bits, b...," Michelle said.

Defence counsel Steve Turner said his client had little recall of his crimes because of the amount of alcohol he had been drinking.

He charted Michelle’s decline from using synthetic highs as an 11-year-old, to drinking to the point of blacking out at 14 and being expelled from school for using cannabis there.

Through 2020, the defendant had been drinking any alcohol he could afford from as soon as he awoke, the court heard.

Since the defendant was facing a significant spell behind bars and owed $3500 in fines, imposing reparation for the damage caused at St Dominic’s was unrealistic, Judge Turner said.