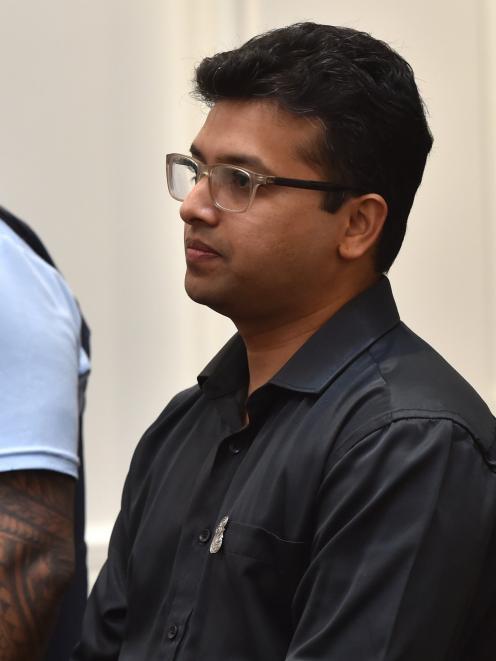 Preetam Maid. PHOTO: GREGOR RICHARDSON
A Dunedin Airport security worker has been found guilty of planting a hoax bomb in a restricted area.

Preetam Maid (32) has spent more than two weeks on trial before the Dunedin District Court after denying a charge under the Aviation Crimes Act.

It took the jury of eight women and three men nearly a day and a-half to return a majority verdict yesterday.

The defendant shook his head and looked down before looking towards his wife in the public gallery when the verdict was announced.

Maid and his supporters openly wept in the aftermath.

Judge Michael Crosbie said in his view the evidence was "overwhelming".

Maid, the Crown said, had been vocal about what he perceived to be lax security at Dunedin Airport, particularly at the northern end.

On March 17 last year — two days after the massacre at two Christchurch mosques — aviation security staff were on high alert and urged to be extra visible to reassure members of the public.

It was the perfect time for Maid to expose the safety shortcomings.

Swipe-card data showed that on the day, he twice entered a corridor which led to the dangerous goods store, spending a total of 20 minutes in there.

Prosecutor Richard Smith said the defendant had only used that particular door twice in the preceding couple of months and was only there seconds.

Maid took items from the store room — a Soda Stream butane canister, a decommissioned cellphone, and red and black wiring — and stashed them in his bag.

Later, CCTV caught him borrowing tape from the reception desk of the aviation security offices.

The Crown said that was when he was assembling the fake bomb — and there was a lockable room in the building he could have used.

Shortly after, Maid was captured on video making an unscheduled trip to the car park.

It was then, prosecutors said, that he stashed the laptop bag containing the imitation explosive device in the car he knew he would later use to conduct a perimeter patrol of the airport premises.

During that task, Maid radioed his boss referring to "foreign object debris" he had spotted through binoculars beside a hut at the north end of the runway.

The Crown said, at that point, there was nothing there; Maid simply wanted permission to approach the structure.

Parked within metres, Maid then slipped the bag from the back of the vehicle into the alcove of the hut and reported the finding to his superiors.

Despite apparent concerns the item was a bomb, the defendant allowed Fire and Emergency New Zealand staff to approach.

There was an obvious reason for that, Mr Smith told the jury.

It was an inside job. And, strangely, the fake bomb came with a handwritten note.

Why did Maid do it?

Mr Smith said it could have been that the disgruntled worker genuinely wanted to draw attention to safety problems he felt needed to be addressed.

His five calls to media within half an hour of finishing his shift on March 17 showed he was keen to push the issue.

But there may have been another reason.

The charge of leaving an imitation explosive device in a security-enhanced area of the airport carries a maximum penalty of five years’ imprisonment.

Maid will apply for bail today before sentencing, which is likely to take place next year.