Ellery Charles Coffin had not slept for about nine days when he attacked the victim. PHOTOS: TINA GRUMBALL
One man was on his ninth day awake. The other was simply caught up in the moment. Their meth-fuelled attack on a man in a vehicle had prompted both to want to change their ways, a court has heard. 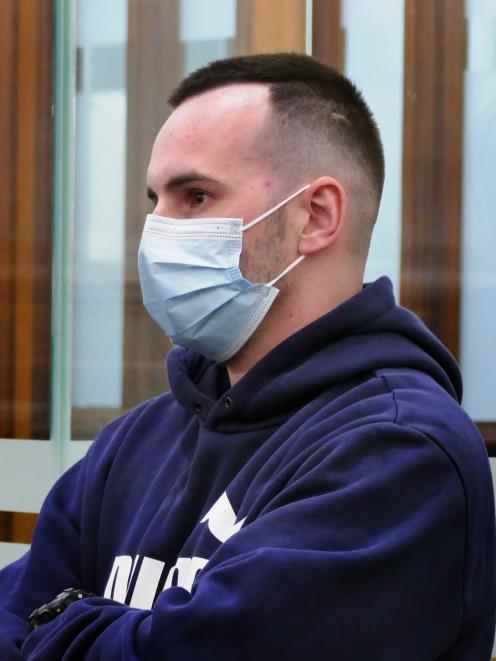 Jacob James Forde got caught up in the moment on July 16 last year.
Ellery Charles Coffin (36) and Jacob James Forde (26) were jointly charged with intentionally injuring a man they knew through class A drug circles.

At Coffin’s Dunedin District Court sentencing yesterday, counsel Andrew Dawson said his client had been awake for about nine days on the night of the incident due to his methamphetamine use.

Coffin had been "using" since he was a teenager, Judge David Robinson noted.

Mr Dawson said Coffin began to use the drug as a way to escape traumatic childhood memories.

Forde, sentenced in March, was also said to have had a long history of drug use, stemming from struggles in his youth.

His counsel, Anne Stevens QC, said Forde became involved not to assault the victim, but to smoke methamphetamine.

Forde "claimed the situation escalated really quickly ... and [he was] only aware of the seriousness when [he] saw the blood," said Judge Robinson.

Consumption of meth was why all parties were in the victim’s Subaru, parked near Woodhaugh Gardens, on July 16 last year.

The three smoked and chatted, until Forde, sitting in the back seat behind the victim, put his arm around the man’s throat.

Coffin, in the front passenger seat, then began punching the victim’s head, face and left side of his body.

When the victim asked "Why", Coffin responded he had "ripped off" his mate.

He then struck the man in the face with a sharp object.

The victim managed to free himself and run to a nearby rest-home to seek assistance.

Coffin and Forde left the scene in the Subaru.

Forde also admitted the arson of the vehicle which was later found burnt out near Mosgiel.

As a result of the assault, the victim received a puncture wound below his left eye, a split lip, swelling, bruising and minor cuts.

He still had a sore head, neck and throat a couple of weeks later.

Coffin presented a letter to the judge through his counsel detailing his remorse for the offending.

He was at a loss as to why the assault happened and had no ill will towards the victim, Mr Dawson said.

"There was no plan that night to go out and execute some kind of retribution".

Coffin now wanted to deal with his childhood trauma through other avenues than drug use, and had strong prospects for rehabilitation.

Mr Dawson said Coffin had "talked the talk, [and] should now be given the opportunity to walk the walk."

Coffin was sentenced to one year and nine months’ imprisonment, with leave to apply for home detention.

Mrs Stevens said Forde was open to the idea that reforming his ways was due for him, and had also written a letter to the victim to apologise.

Forde had "positively expressed a desire to change," the judge noted.

Forde was sentenced for three years and two months’ imprisonment, the term taking into account the "injuring" and arson, as well as three charges from an unrelated incident of possessing a firearm, methamphetamine and methamphetamine utensils.

Judge Robinson said a "silver lining" from the incident was the victim used it as a turning point in his life.

The victim described the incident as the "most frightening thing [he’d] ever experienced".

He had been sober ever since.