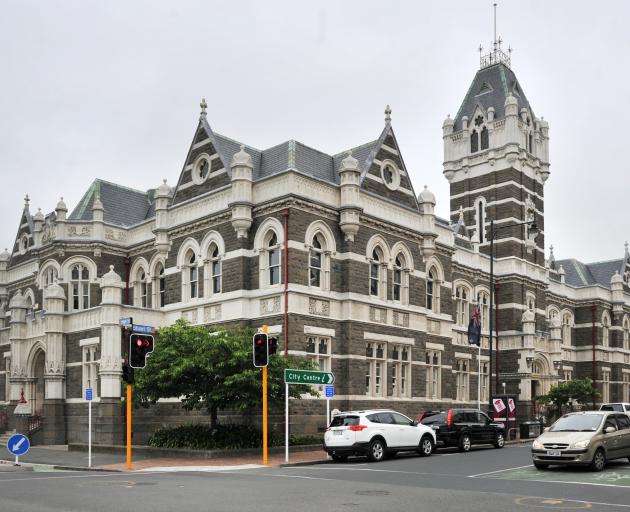 Dunedin Courthouse. Photo: ODT files
A woman who claims she was assaulted by her police officer partner said she later lied about making up the allegation to get him home for Christmas.

An alcohol-fuelled argument allegedly led to violence between the senior Dunedin policeman and his then-partner, the Dunedin District Court heard today.

The officer, who has interim name suppression, appeared before Judge Kevin Phillips for a judge-alone trial on one charge of assaulting a person he was in a family relationship with, and one charge of possessing a firearm without a licence.

The man denies the charges.

On December 20 last year, the man was out at a Christmas party while his partner was at home.

Their three children were at the man’s parents’ home for the night.

The woman consumed nearly a bottle of wine during the course of the evening, while wrapping Christmas presents and reading a magazine.

But the Christmas cheer soon ended when the man returned home around midnight.

His now ex-partner said he arrived with ‘‘a face like thunder’’, and launched into a ‘‘dreadful verbal attack’’ on her.

He allegedly called her a ‘‘s*** mother’’ and an alcoholic. She then stood up and slapped him across the face.

They then engaged in a lengthy argument about their relationship.

The defendant allegedly told the woman that she was not good enough to be the mother of his children, and that she was never going to get them back.

She said she then ‘‘lost it’’ and started slapping him multiple times.

She then ‘‘blacked out’’, and the next thing she could remember was standing in the kitchen talking to a police officer.

A photograph showed she had a swollen eye and swollen lip.

The court was played a recording of the woman’s tearful 111 call, where she said the man had hit her.

The woman told the court she did not remember him hitting her, or making the phone call.

She said she did not want to be giving evidence, as she believed there would be financial repercussions for herself and her children.

Defence counsel Anne Stevens QC suggested the woman had made up the allegations out of spite, and that she had become an accomplished liar due to her alcoholism.

She pointed to the fact the woman had told several people, including police officers, after the alleged incident that she had made it up.

She also suggested the woman wanted to get her partner fired.

The woman acknowledged she told people she made the incident up, but said she did so to get her partner home for Christmas, and because she was worried about his employment.

It would not be beneficial for her or her children if the man lost his job, she said.

She also denied suggestions she had caused the injuries to her face herself.