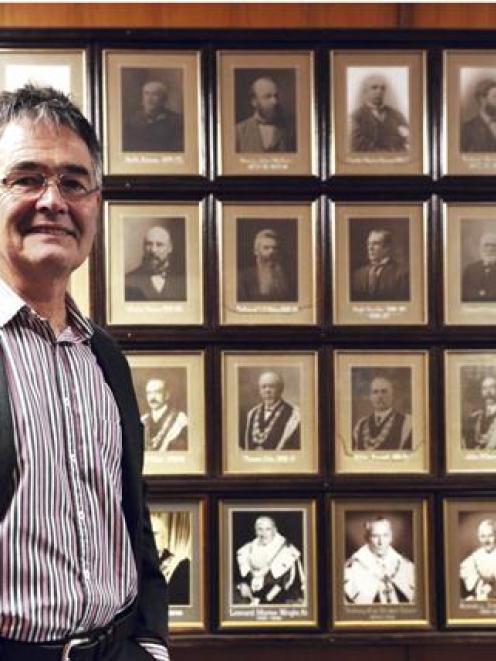 Mayor Dave Cull is planning a change to one of the traditions of the Dunedin City Council. Photo by Gerard O'Brien.
Almost 150 years of Dunedin councillors rising from their seat to pontificate, pronounce and proclaim might be over, with standing orders at the Municipal Chambers soon to be to sit down.

And research on the matter has shown, both in Dunedin and other centres, while the tradition of standing to speak at council meetings might be widespread, the standard rules New Zealand councils use are far from specific.

The issue has come to light recently, since Mayor Dave Cull relaxed a rule of standing to speak at Dunedin council meetings.

Mr Cull's more casual attitude to the customs of office has already set off minor controversy, with some discussion about his less consistent wearing of ties and mayoral chains.

At a meeting this week, councillors again voted, at the mayor's behest, to dispense with standing orders, or at least any referring to standing up.

But questions remain as to whether they have to do so, as no specific rule can be found that stipulates when or why a councillor must stand to speak.

"I inherited a tradition," he said of the rule.

"For whatever reason, the custom was you stood to speak.

Mr Cull described the rule as "an unnecessary formality".

"It slows things down," he observed.

He had discussed the matter with governance manager Sandy Graham, but was unsure what had to be done to get rid of the rule, if in fact there actually was a rule.

Yesterday, he said there was a will for change at the council table, and he would do whatever was needed to bring about that change.

Asked where in standing orders the rule was, governance manager Sandy Graham replied: "You ask an interesting question."

After some research she had found there were "oblique references" to standing, mainly in rules about when councillors should sit down.

"It assumes that you are standing," she said.

Ms Graham said the closest she could find to a rule for standing was, for instance, a rule like 3.12.1, which said any member may rise to speak to a point of order, and the member previously speaking was to be seated and stop speaking.

Ms Graham said she believed the tradition of standing stemmed from a time before councillors had public address systems, and they had to stand to be heard.

Invercargill City Council chief executive Richard King said Invercargill councillors did stand to speak at council meetings - although not at committee meetings. Mr King agreed the rule was "implied" rather than specific.

Ms Graham said Dunedin had modified its orders to the point they were no longer "standard", but many councils had not.

She said the council was going to have another look at standing orders this year, to "bring them into the 21st century".

Mr Cull said he was not planning a clean sweep of traditions at the council.