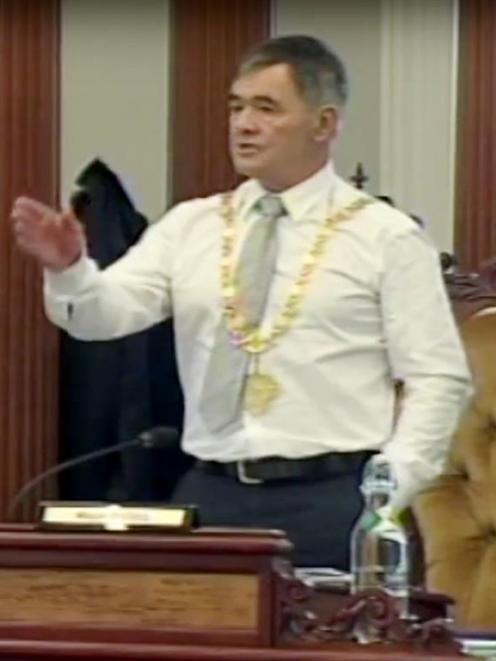 The extraordinary scene saw both men on their feet, their voices raised as they roared over the top of each other, before Cr Vandervis packed up in silence and left with a parting shot.

The exchange erupted during a discussion on a new council procurement policy, when Cr Vandervis suggested, based on his past experience, a "cosy relationship'' with council managers was needed to secure work.

That prompted Mr Cull to warn Cr Vandervis his comment was "tantamount to suggesting fraud'' and, without evidence, it was "not acceptable to have that allegation made in public''.

"No evidence has ever been produced for any of the allegations you've made.'' 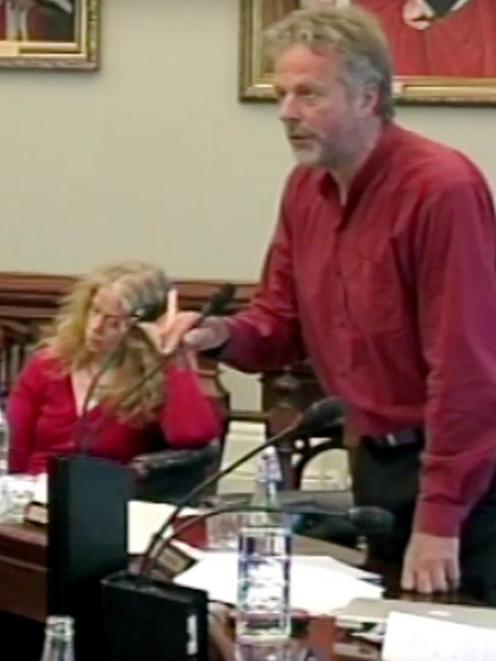 Cr Lee Vandervis airs his views at yesterday’s council meeting. Photos by 39 Dunedin Television.
Cr Vandervis persisted, maintaining he had given "personal evidence'' of his claims to Mr Cull and more than one council chief executive.

"I have given you personal evidence in your office - evidence I'm prepared to swear on a bible for ... Don't tell me I'm a liar.''

Mr Cull rejected that and repeatedly told Cr Vandervis to leave, saying he had ‘‘created disorder'' by making "false allegations''.

When Cr Vandervis continued to object, Mr Cull had clearly had enough: "You, sir, are a liar. Now leave.''

Cr Vandervis eventually packed up in silence, before delivering a parting shot as he headed for the door: "Your failure to learn from my experience ... is most disappointing.''

Cr Vandervis, contacted after the meeting, said he would not consider legal action over Mr Cull's comments because he did not want to add costs to ratepayers.

Yesterday's clash was the latest - but perhaps the most heated - in a series of public spats between the pair since Cr Vandervis was re-elected to the council in 2010.

He was temporarily stripped of some voting rights earlier this year, after complaints of bullying and misleading behaviour, and staged a walkout from a council meeting rather than agree to a "genuine'' apology.

In August, Mr Cull challenged Cr Vandervis to develop some "testicular fortitude'' and provide evidence, after Cr Vandervis claimed to have "plenty of evidence'' of tender fraud involving the council.

But the feud also included an apology by Mr Cull last year, after he described Cr Vandervis' record as "shonky'' and his policies "nutty and extreme''.

That resulted in the intervention of an independent commissioner who, following a hearing, criticised both men for wasting ratepayer money on the complaint.

Yesterday, after Cr Vandervis left the meeting, Mr Cull reiterated his reason for calling him a liar, saying "on no occasion'' had the councillor provided evidence to support allegations against council staff.

Despite the heated scenes, councillors voted to adopt the updated procurement policy, which sought to ensure the council followed best practice when contracting outside companies to do work for it.

Cr Mike Lord suggested the council could go further, by agreeing to favour local bids even if they were up to 10% higher than tenders from outside companies.

Mr McKenzie said that sort of initiative could be included in a new purchasing manual, to be drawn up to implement the new policy, but he would be hesitant to set a specific figure in favour of local companies.

"That can send the wrong message to the market as well.''

Cr Vandervis, speaking before being ejected from the meeting, said the advantage of such support would be to keep more money in the Dunedin economy, which would have "great benefit for our city''.