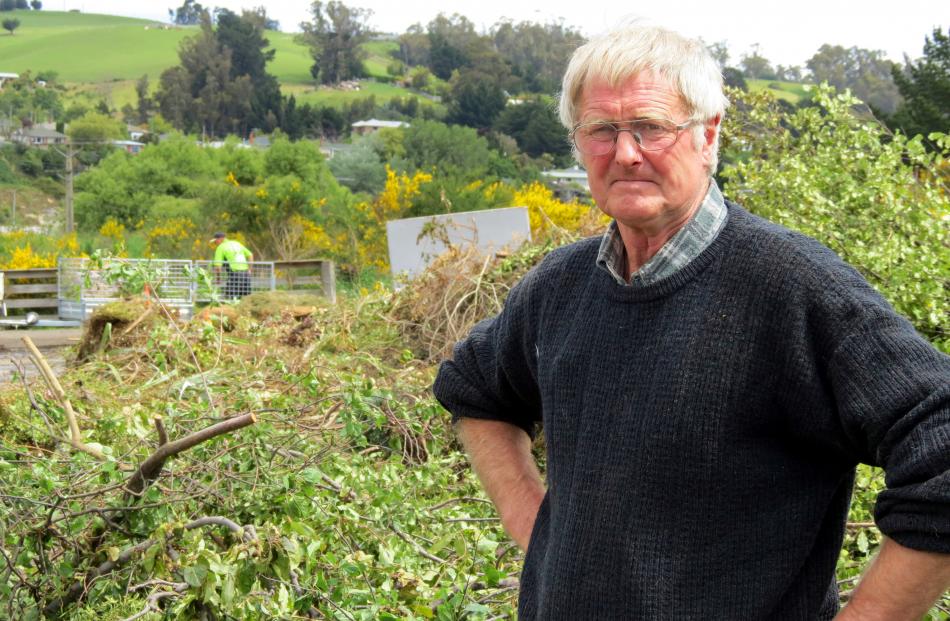 Bob Gillanders waits for another trailer-load of green waste to arrive at his site in Burnside. Photo by Dan Hutchinson

A retired farmer is taking on the Dunedin City Council at its own game by starting up an alternative green waste operation. Dan Hutchinson finds out who is behind the growing pile of greenery at Burnside.


A green-waste disposal business in Burnside is drawing praise from regular users but has authorities concerned about the potential for pollution.

Bob Gillanders said more than 1000 trailer-loads of green waste had been deposited at his Burnside dump since he opened it two months ago.

''The reason was purely and simply one thing - the DCC were charging too much.''

A sign strategically located opposite the entrance to the council's Green Island landfill advertises that trailer loads of green waste can be taken to Burnside for just $25.

Regular customer and Green Acres gardening franchise operator Geoff Logie said he paid a regular-customer rate of just $15 for a load - up to one-third of what he paid at Green Island.

''Bob is marvellous. It is what Dunedin needs.''

Mr Logie said he could come and go as he pleased, even after hours, which was a huge bonus in the busy season when he was making four trips to the landfill a day.

Otago Regional Council director of policy planning and resource management Fraser McRae said he had concerns about the operation.

''At this point we are concerned about the potential for odour being discharged to air and for leachate to run off and get into Kaikorai Stream directly or through groundwater.''

Dunedin City Council consents manager Alan Worthington said Mr Gillanders was operating in an area of the former Burnside Freezing Works that was zoned ''Industrial 1'' where such activities were permitted - subject to performance standards such as vehicle access, parking and noise.

''We are providing a composting service as well. We compost it down which I don't think he is ... If you are just filling a gully with it, it is just taking money for doing nothing.''

Grass clippings and flax did not shred well, so half the material they received as green waste had to be sent to landfill anyway, Mr Featherston said.

Mr Gillanders told The Star he would begin the resource consent process for his composting operation this week.

Mr Gillanders said green-waste disposal was not ''rocket science'' and was ''all pretty straightforward''.

He said in hindsight he would have got machinery to compost the waste from the beginning but he wanted to see how well supported the dump was before investing too much money.

He said he was able to provide the service more cheaply than the DCC because he did not have to pay managers ''100 grand a year to sit in a chair''.

''It is amazing how much green waste there is in a city the size of Dunedin ... People have been very good as to not putting plastics or rubbish in which I appreciate.''

He said the venture was not selfless and was done for ''a commercial purpose'' but he thought the council's service was far too expensive.