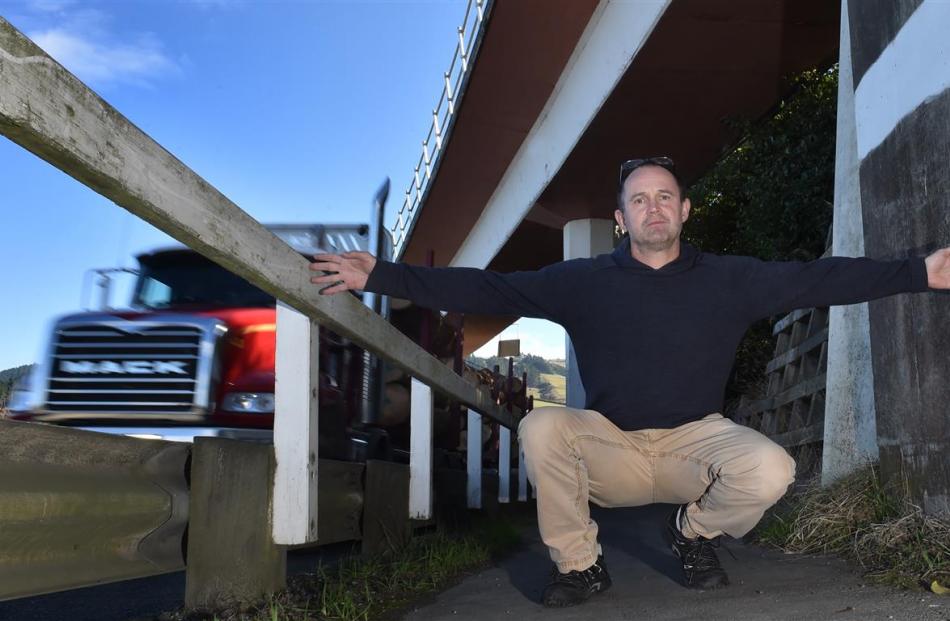 Chalmers Community Board chairman Steve Walker says the footpath on State Highway 88 is too narrow for a shared cycle/walkway. Photo by Peter McIntosh.

West Harbour residents would rather see the completion of the area's shared cycleway delayed than the low quality option proposed by NZ Transport Agency (NZTA).

At yesterday's annual plan hearings, Chalmers Community Board chairman Steve Walker made clear his views about the NZTA's plan to complete the Sawyers Bay and Port Chalmers section of shared pathway using the footpath running next to State Highway 88.

Mr Walker's comments come after the NZTA announced last month it would be at least another two years before construction could begin on the St Leonards to Port Chalmers section of cycleway or shared pathway.

It also said more affordable solutions were needed to finish the final 5km section of the path, after the cost of the present design was estimated at more than the $6million-$10million budgeted.

This would probably mean widening the footpath between Sawyers Bay and Port Chalmers, instead of carrying out the substantial land reclamation previously proposed at Mussel Bay.

Mr Walker said residents he had spoken to were ‘‘universally'' against using the footpath, which was narrow in places and exposed people to water and debris swept up by passing trucks.

The West Harbour shared pathway was of exceptional quality and he would not like to see that ‘‘corrupted for the sake of getting it done''.

Instead, he believed people would prefer the cycleway to finish at Roseneath in the short term, and have the final section delayed until the situation changed and a better solution could be found.

A solution could involve moving the railway line, which at present was deemed too expensive.

‘‘In fairness to everyone who wants to see this path completed at a reasonable cost, the onus is on [NZTA] to fully explore the alternatives to the original design and present them back to the community for further input.

●Mr Walker raised other issues yesterday, including asking the council to repair fencing along SH88, which had been left to deteriorate and was an eyesore for cruise ship passengers.

He also called for continued investment in the Port Chalmers pool.