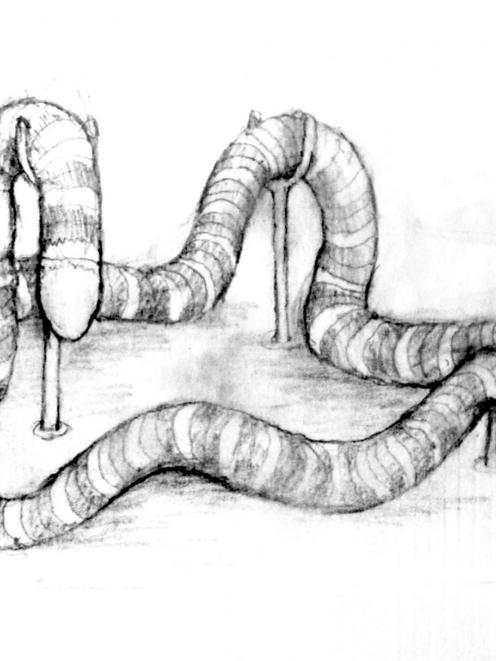 Members of the Otago Sculpture Trust are calling for the Dunedin City Council to start from scratch as it prepares to sign a contract for a new sculpture at the Dunedin Botanic Garden.

Council staff have confirmed they had concluded negotiations for a giant worm sculpture, Ouroboros, by Julia Morison, and expected to sign a contract next week.

Council parks, recreation and aquatics group manager Mick Reece said the aim was still to have the sculpture completed by the end of October, in time for the garden's 150th celebrations.

''That's the intention . . . it's not the end of the world if it's not, that's all we're aiming for, but that would have applied to any of the sculptures.

His comments came as a group of Otago Sculpture Trust members issued a joint statement to the Otago Daily Times renewing criticism of the council's handling of the project.

The statement, signed by trust chairman Stephen Mulqueen and 13 other members, called for the project to be scrapped and the commissioning process to begin again.

Their call came weeks after the council confirmed plans for Ouroboros, but the trust had since taken legal advice before opting for a meeting of its members and other upset artists.

Their joint statement reiterated earlier criticisms of the council's processes, after the sculpture ended up costing $100,000 despite a council brief stipulating a maximum cost of $60,000.

The sculpture is being paid for from money bequeathed to the council for the garden.

Mr Reece has previously said the $60,000 figure was an ''indication'', rather than a firm budget.

The trust's statement claimed the process was ''a farce'', as some artists had been put off submitting proposals initially while others were never told higher costs could be acceptable.

The trust's statement went on to criticise the council's handling of earlier projects, including the Harbour Mouth Molars, but also suggested collusion over the latest work.

The statement questioned whether council staff were ''in private consultation with the successful artist during the commissioning process'', as it ''seems incredible'' an artist would risk being left out of pocket by bidding beyond the brief.

Mr Reece said the statement's suggestion of collusion was ''just unbelievable'', while other claims were ''basically unfounded and inaccurate''.

''They're fighting what they see as a bigger crusade, but all the Botanic Garden is interested in is getting value for money, something that's going to be good fun, well worth the money, and is going to be there for a long time.''

Asked if it was too late to start the process again, Mr Reece said: ''There's no reason to.''

''We're absolutely rapt with what we've got.

''There is certainly no question of us doing anything to jeopardise this project's completion and meeting our target to get it in place before the end of October.''

Mayor Dave Cull had earlier told critics to come up with a better process, if they did not like the outcome, and Mr Reece said that challenge remained.

More information about the contract would be released once it was signed, he said.