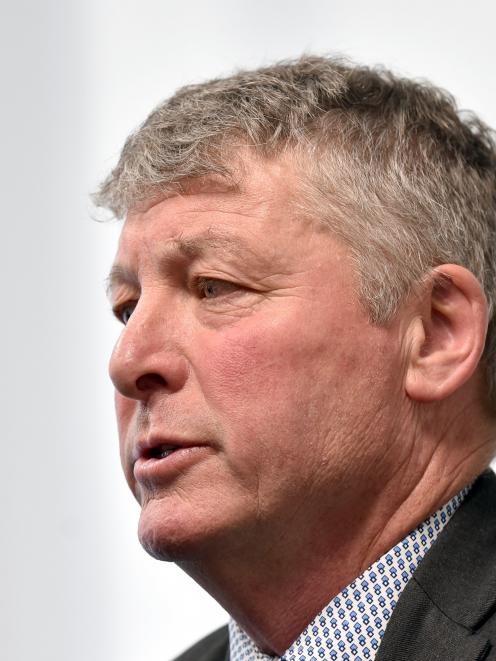 Andrew Noone
Otago regional councillors are saying egos are getting in the way of working together with the Dunedin City Council and the chairman has singled out the mayor.

Regional councillors continued to express frustration this week over an apparent unwillingness from their city council counterparts to address South Dunedin’s challenges together.

The Otago Regional Council (ORC) has sought a collaboration between the councils’ elected members on work in the low-lying suburb for years.

ORC chairman Andrew Noone recently met Dunedin Mayor Aaron Hawkins and senior staff from both councils to discuss the matter.

"I don’t want to use this pun, but you can take a horse to water but you can’t make a mayor drink," Mr Noone told ORC councillors this week.

Nevertheless, for the time being he agreed with the city council’s approach, Mr Noone said.

Newly appointed South Dunedin Future programme manager Jonathan Rowe, who is co-funded by both councils, was doing work that might substitute for such a relationship, he said.

Mr Rowe’s work programme is touted by the DCC as a response to challenges facing South Dunedin and possibly resolving other issues such as poor-quality housing at the same time.

More than 10,000 people call South Dunedin home, but the suburb was established on land reclaimed from coastal wetland and it is vulnerable to a variety of hazards, especially those climate change is expected to exacerbate.

Mr Noone said he agreed with the city council position that there were no major decisions that needed to be made in the next six months.

The DCC was not saying "never" in the future, Mr Noone said.

Cr Gretchen Robertson said the ORC had been seeking a relationship with the DCC in South Dunedin for a decade.

The issue was not about big decisions in the short term, she said.

It was about building a working relationship so that councillors could talk to the community and build a picture of a future to be proud of for the area.

It was the councillors’ job to make a difference in the communities they represented and she could not understand the resistance from the DCC, Cr Robertson said.

"It’s our job. If we are afraid that there’s an election coming up, that’s not good enough, actually," Cr Robertson said.

"I can’t understand why there’s a brick wall all the time on it."

ORC operations general manager Gavin Palmer said he could not see any harm in forming a joint governance group now.

He said ORC staff had brought forward many resolutions over the years to do just that, but the ball was now in the councillors’ court if they wanted to get something done.

"There’s only so much staff can do," Dr Palmer said.

Mr Hawkins responded to the criticism yesterday and said that it was evident
from the DCC submission to the ORC long-term plan his position was not his alone but the view of the elected membership of the DCC.

With Mr Rowe now co-ordinating work in South Dunedin, there was a far clearer strategic view of how all the work going on fitted together.

It involved the DCC and ORC, but also a significant group of other agencies and stakeholders, whether they were science or community focused, Mr Hawkins said.

At the meeting he had with Mr Noone, it was agreed that Mr Rowe’s reporting to both councils was sufficient to ensure a shared understanding of what was going on, he said.

If that proved insufficient, the conversation they had could be revisited.

"It is a bottom line of the city that decision-making on issues under our delegation sits solely with us," he said.

The ORC this week passed a resolution to formally write a letter to the DCC seeking a public response as to its willingness to jointly address South Dunedin at a governance level.

Much the same comment could be made of ORC and it should look to a tidy, functional own house with good communications rather than outside. ORC seems to be empire building and we the rate-payers do not need to have two bodies representing our interests on the same matters. Each ratepayer body should focus on its core interests, it is nonsense to be paying two bodies for governance on the same matters.

This is a bizarre comment from No one? The appalling performance of ORC. The fighting and back biting amongst Councillors and an Executive that does not understand the basics of Councillors having the democratic right to question the performance of ORC management. A 72% increase in rates! This jester must be joking and needs to shut up?

oh this is rich coming from the group of farmers that cant get a bunch of their own kind to adhere to new water rights law within the region. for decades this ORC has operated as a shadowy organisation ignoring any rules. why would the DCC want to share governance with an organisation that spent ten million dollars trying to find office space?

Are the words pot, kettle or black familiar to you Cllr?