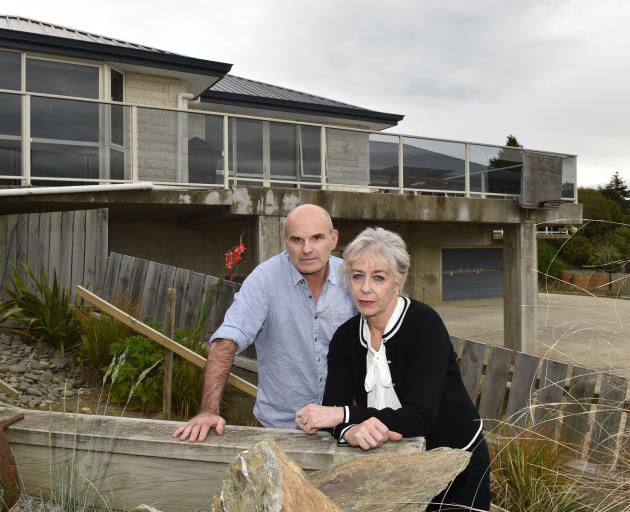 Seven years after issues with their house first became apparent, Nicole and Pete Labes are considering whether to return to court to reopen a 2016 settlement with the council.

They say they were misled by the council about what work would be required on their house - but the council said it had been working with the couple for years to resolve the issue.

The pair filed a High Court claim in 2015 following the discovery of structural and environmental issues with the Mornington property they bought in July 2012.

According to the Labeses, the council signed the final code of compliance certificate 10 days before the property changed hands.

The first of the issues was brought to the council's attention within eight weeks of purchase and from there it turned into a ''cascade of issues affecting not only the property in question but neighbouring properties as well'', Mrs Labes said.

Issues were discovered with the foundations of the house, the construction of retaining walls, the existence of contaminated soil, the ingress of water into both the living space of the house and the basement, plus issues that had to be let go due to the 10-year time constraints under the Building Act.

Council building services manager Neil McLeod was invited to the property early in 2013 to discuss what the Labeses' building consultant had discovered about the waterproofing technique used, namely that it was not compliant.

''When we complained about it, we were told by Mr McLeod that the council wouldn't consider the lower level as a livable or habitable space and that we had to accept it was a 'buyer beware' issue.''

The affected parties eventually went into mediation and a settlement was reached.

Mrs Labes said they were told the waterproofing issue would not need to be fixed.

But after mediation, the council changed its stance and said the waterproofing was not acceptable and had to be repaired or replaced, she claimed.

She said the work required to repair the issues would cost close to $180,000, and she believed they had already spent more than $100,000 on the case.

The council did not accept it had, in any way, misrepresented the issue or misled the couple, he said.

''We are very clear that this situation is different to the High Court Southern Response decision.''

The council and other parties, including the Labeses, entered into a confidential settlement agreement in 2016, and the council was adhering to the terms of the agreement, which include that those terms were not to be made public.

''The Labeses have had a solicitor act for them throughout this process, including the settlement discussions.

''If they continue to have concerns about the process, we suggest they discuss these with their lawyer.

''We have tried to work constructively with the Labeses - if they wish to overturn or renegotiate the settlement then that is a matter for the courts.''

Like the Nike slogan Just do It. Create a Fundme page I'm sure people will donate, These Councils have slopped shoulders and they need to be held accountable they are experts take your money but don't back it up. We purchased a house in Andersons Bay - (since sold) off serial DIY'ers who buy and sell houses in Dunedin, heck when we questioned the work they threw a hissy fit and engaged a ex DCC inspector to commission a report. After purchase other work was second class. On doing some basic Renos our builders said the work is Below standard, within a month we replaced the Hob and hot water heater because they broke, Our Builders said they can't be held accountable but builder could be if it was there work

Any Judge should grow some and make the council pay your court costs. These Idiots are playing with peoples live investments.

I do sympathise with the Labes, especially when considering the fact that property is one of our largest personal investments. My first question would be, was a detailed building inspection completed by a suitably qualifed inspector, and was a LIM report issued upon purchase? In the rush that is our currently property market, it seems to me purchases barely have a chance to view a prospective property let alone carry out full due dilligence when considering a purchase. Then as problems surface our first thought of remedy is with the council, which, in reality, can't know about every fault with a property. "Caveat Emptor" the buyer should take full responsibility when they sign the dotted line. And the council should be as helpful as possible. For those who wilfully rip in then cover up problems to make a profit, throw the book at them. The cost of 'professionals' and the property rush is biting innocent peoples wallets and emotions. We all have the right to a comfortable home.

Who was the Realtor?