By Emma Perry
5 Comments
The Dunedin City Council is hoping to get up to 300 of its staff back in the saddle in a proposal to give workers pay advances to buy e-bikes. 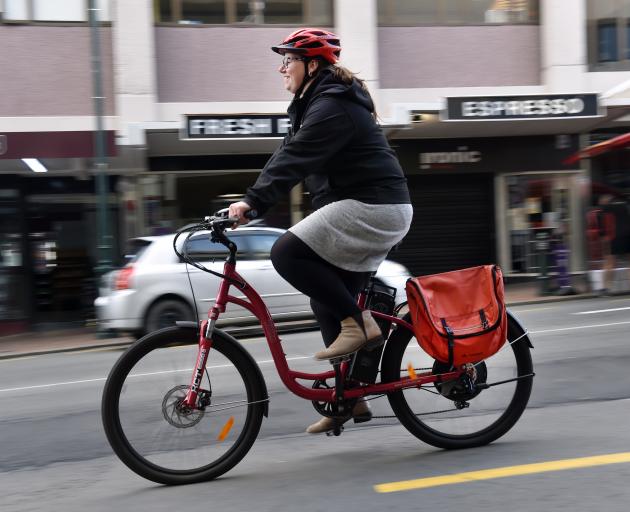 The purpose was to promote low carbon and healthier transport options, he said.

It was also hoped the scheme would reduce road congestion and free up commuter parking.

Mr Drew estimated up to 300 e-bikes could be bought in the first year of the scheme.

''That interest will be clarified further once we know what type of e-bikes are offered from a supplier(s).''

Under the scheme, staff could be given $2000 of their future salary, if required, and would have to pay it back within 12 months through regular salary deductions. If they left council employment, they would have to pay back the debt in full.

The council would be invoiced for $2000 by the supplier - tenders for the supply of the e-bikes are being sought through the government electronic tender service - the staff member paying the rest.

Interest-free credit from e-bike suppliers was also being considered.

The council was working with the Otago Polytechnic, which would allow a possible supplier or suppliers to have the opportunity to provide bulk sales of e-bikes to both organisations, Mr Drew said.

A spokeswoman said the council had one e-bike in its council vehicle fleet, for use by staff for work purposes.

The Otago Polytechnic did not respond to questions yesterday.

Socialist generosity: we'll lend you your own money to fulfill our own narcissistic agenda, because we know what's best for you.

Awesome! I bought an e-bike earlier this year and commute to work and back as well as other trips when I don't require boot space. It turns a 45 minute walk into a 8 - 10 minute ride. Just be sure to get some good lights and high-vis gear because lots of cars don't see bikers.

I'm sitting here looking at my DCC rates bill wondering why it keeps going up? It shouldn't be considering DCC has $600,000 sitting around to offset no-interest loans for its employees to purchase e-bikes. I thought DCC was operating at a deficit? If they have extra money sitting around shouldn't that go back to the ratepayer? I guess the real question might be is this little scheme even legal? Seems like fraud, waste and abuse to me! I hope some legal advocate is looking at the legality of this program because it just doesn't look right! Dunedin has a wide variety of very serious problems. We cant keep wasting money on stupid stuff like this? Im not against being green but not at the expense of other more logical and useful expenditures. For a lot of these environmentalists being green is a religion and they become extremist. I see this becoming a big problem with the mayor and DCC. If DCC has an excess of funds, give it back to the ratepayers dont waste it! We work hard for our money and spending it like this a real insult. Maybe the ratepayers should start looking at legal ways to hold the politicians more accountable. Anybody interested in a recall election?

So will they cycle on snow, rainy days?, I doubt it but will prefer to be driven around in their cushy limos on those days.

I can't reply for council staff. But for me, switching from a conventional bike to an e-bike *has* made it easy to keep cycling on snowy and rainy days. Biking is still quicker, and I would still have to walk from wherever I'd parked the car, or got off the bus , so you may as well just ebike to the outside the door. I did have to invest in a face-warmer thing for the coldest days...