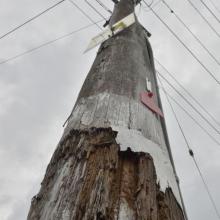 A pole like many causing public concern. Photo: ODT.
The Dunedin City Council has denied being soft on Aurora Energy over the risk to the public caused by rotting poles.

The Central Otago District Council (CODC) has been applauded by whistle-blower Richard Healey for asking a series of questions over the danger presented by compromised poles, but he has called on other councils in the region to take a tougher line.

DCC chief executive Sue Bidrose said it took the health and safety risk seriously and questions about the risk from poles would be answered by Dunedin City Holdings Ltd’s Deloitte review.

Health and safety staff at the DCC were keeping a close eye on the review process.

Once the review was completed they would know "exactly what the issues are and the adequacy of the process that Delta has in place".

She disputed Mr Healey’s suggestion the council was more concerned about its role as owner of Aurora and Delta than health and safety.

"With all due respect, Richard Healey hasn’t talked to anybody in this organisation about that."

Queenstown Lakes Mayor Jim Boult said in a statement that last month it had "emphatically expressed its significant concern" to Aurora over the state of the poles in its district.

"Like CODC, we are looking for an absolute commitment to both a prioritised and managed pole replacement programme that can instil confidence into the future and ensure the safety of our residents and visitors," Mr Boult said.

Aurora Energy chief executive Grady Cameron had offered it some assurances and he looked forward to discussing the matter with him in person in Queenstown at a meeting scheduled for early December.

"As of now I think our communities should be proactive and vigilant and Mr Cameron has advised that any concern should be addressed to Delta directly [0800 433-582]."

With all due respect Ms Bidrose, that is exactly what I talked to the Mayor about in an email which he never replied to. Perhaps the Mayor doesn't fall within your definition of " anybody in this organisation" .

I'm a little confused, I sat not more than 10 metres from you during the last council meeting. My presence was pointed out by one of your councillors. There was ample opportunity to talk to me before, or after the meeting. Surely if, as you say, you take health and safety risks very seriously then you might have taken the opportunity to proactively approach me?

Too busy? You could have assigned the task to one of the many staff present, or simply asked for my contact details.

Here's some advice that both you and Delta seem to need - desperately. If you are serious about health and safety you don't wait for the problems to come to you. You go out and proactively seek the problems. What exactly are you trying tho say here? You weren't aware of my concerns? You can only reply, but not initiate a conversation? Please, I'm genuinely interested in your response.