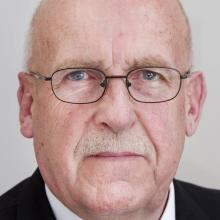 David Benson-Pope.
Three councillors are demanding an answer to what one says is the "big flashing light" question about Dunedin and Central Otago’s compromised power pole infrastructure.

At the Dunedin City Council’s first meeting since councillors were sworn in last month they will vote on a notice of motion to ask council-owned holding company Dunedin City Holdings Ltd (DCHL) to "urgently advise" whether it still has confidence in the board  of Delta and Aurora.

Cr David Benson-Pope yesterday described that as "the big question with a big flashing light I want an answer to".

The notice of motion follows news of three separate investigations launched into the infrastructure maintenance company and the lines company, which are both in the spotlight amid claims they failed to deal with dangerous power poles.

The matter was moved by Cr Benson-Pope and seconded by Crs Aaron Hawkins and Kate Wilson.

Under standing orders, any two councillors can submit a notice of motion to chief executive Sue Bidrose within five days of a meeting.

Cr Benson-Pope said a notice of motion could be refused by Dr Bidrose if it was a direct contradiction or negation of something that had been decided.

The motion, however, was included in the agenda for the meeting.Cr Benson-Pope said the matter had been referred to in the council’s inaugural meeting late last month, but had not been discussed.

The motion for Tuesday’s meeting, he said, was "a distillation" of what had been referred to.

"We wanted to make sure people are aware that is the number one question in our minds and we want an answer.

"I don’t expect to get an answer on Tuesday, but answered it will be."

Cr Benson-Pope said it would be useful for the community, and the directors of DCHL, who needed to provide "a very clear answer to those questions".

Asked why the motion was necessary when investigations were already under way — DCHL has Deloitte looking into the issue — Cr Benson-Pope said the community wanted an answer.

"If they have confidence in the board, which would be an interesting conclusion to reach, then you would have to ask why we’ve got the shambles we’ve got, and if they don’t, then clearly there are going to be some consequences.

"This will help focus everyone’s mind, I’m sure."

The motion had not included a query about confidence in Delta chief executive Grady Cameron, as he answered to the board, not the council.Cr Hawkins said there was "a fair amount of public anxiety"  on the power pole issue.

"Bringing this motion to council sends a strong signal to our community that we’re taking this as seriously as we should be.

"Whether or not the DCHL board has confidence in Aurora’s governance is the big question, and in fact the only question council can ask at this stage."