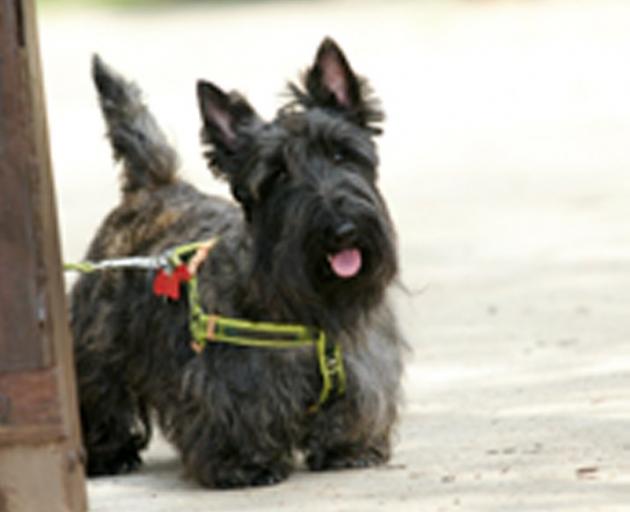 The Scottish terrier in the Dunedin City Council FYI brochure.
How chunky is that doggy in the picture?

Not too chunky, according to the Advertising Standards Authority, which received a complaint about a Scottish terrier being used to advertise a Dunedin dog park which caters to smaller dogs.

The complainant, who was not named, alleged an advertisement appearing in the Dunedin City Council’s July "FYI" brochure was misleading, deceptive and confused readers.

It shows a picture of a leashed Scottish terrier, and explains a new dog park specifically for small dogs, the Forrester Park Dog Park, had opened in Normanby.

The complaint to the ASA said the advertisement was not truthful or balanced, misled, deceived and confused readers, and abused their trust and lack of knowledge.

The dog pictured was ineligible to use the dog park as the average weight of a terrier was between 8.6kg and 10.4kg, the complainant said.

"The dog pictured may not use a small dog park because it is oversize," the complainant said.

"... the picture deceives them into believing similar-sized dogs with that ‘chunky’ body type can use the park.

"As the pictured dog is considerably oversized, the advertisement misleadingly conveys the park benefits far more dogs and owners than it actually does."

They said the advertisement was false as it was not a new dog park.

"No general reader would understand ‘new dog park’ and ‘another location’ to mean a tiny area in the corner of a pre-existing dog park that small dogs have been using for more than two decades."

The complainant asked the ASA to correct the "predictably erroneous public perceptions".

The chairman of the ASA reviewing the complaint said the picture of the terrier was illustrative of a smaller dog breed and therefore was not misleading, noting the advertisement referred to a weight maximum for dogs using the park.

It referred to a fully fenced area the council had designated as a dog park for smaller dogs, and was not likely to mislead consumers, they said.

The advertisement promoting the small dog park was not likely to confuse consumers and therefore did not meet the threshold to breach the advertising standards code.

There were no grounds for the complaint to proceed, it was ruled.

A council spokesman said it was aware of the complaint and was happy with the outcome.

"Doggy not dodgy: DCC cleared over brochure ad", how much of the ratepayers money did the dcc pay to get out of this?.