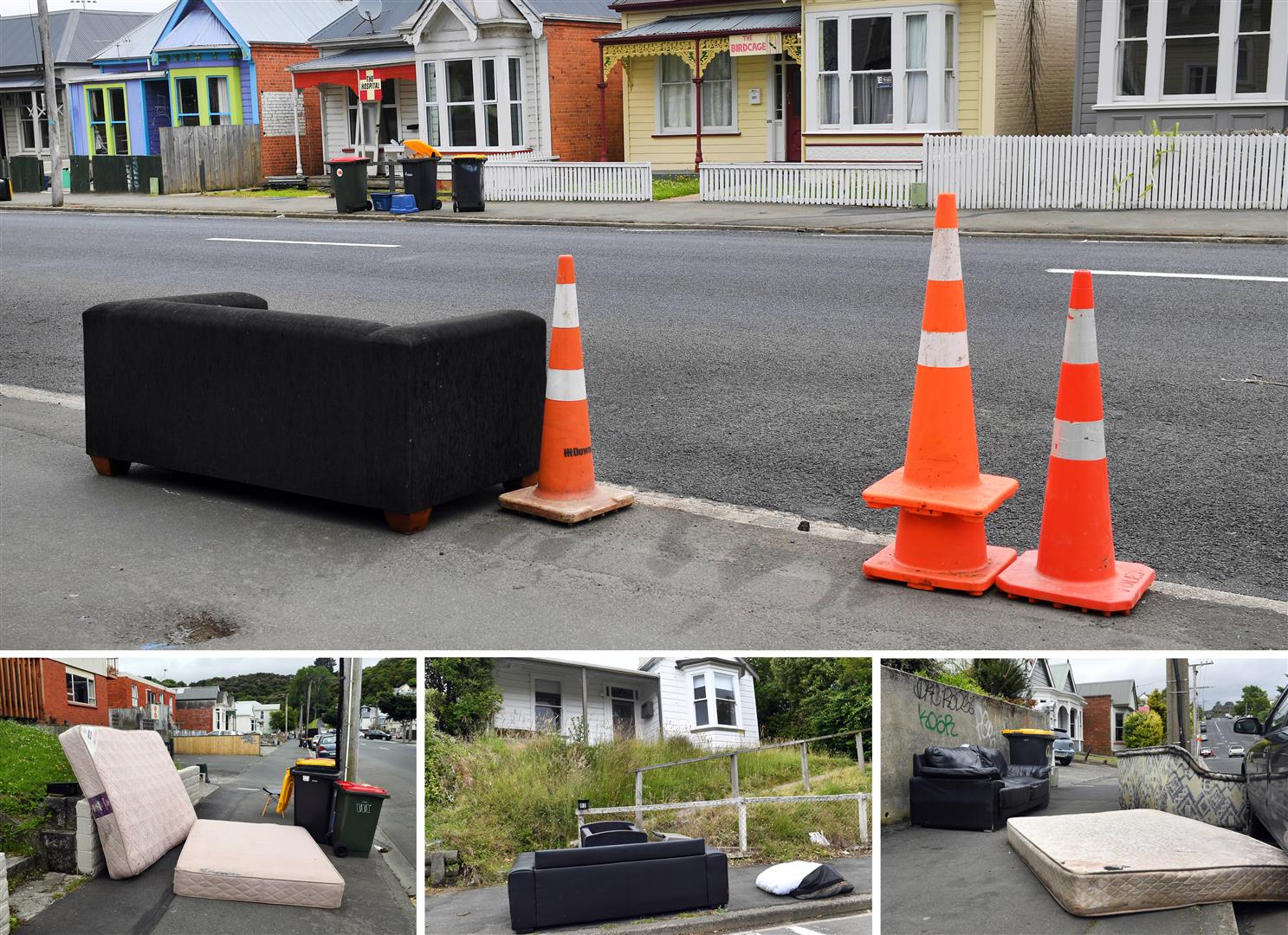 But whether those responsible for the mess were recently departed students, or landlords cleaning out otherwise empty flats over summer, is not clear.

Furniture has also been dumped outside the Salvation Army Family Store in Dunedin — despite pleas by the organisation for the public not to do that.

It and the University of Otago were also working together to try to encourage ‘‘students, property owners and property managers’’ to remove rubbish in a responsible way.

That included extra recycling bins, rubbish collection days and skips in the area, to help recycle unwanted goods and ‘‘tidy up the area’’, he said.

A letter has also been sent to property owners and property managers by the DCC, reminding them of end-of-year services including the Rummage op shop at the Green Island landfill, he said.

They were also encouraged to help students remove unwanted rubbish by providing DCC rubbish bags, a trailer or a skip, he added.

A spokeswoman for the University of Otago said it also pays for skips during the year.

Most of the rubbish had been on the street since December, when students left town, and the dumping of it highlighted the difficulty some students faced in getting to the landfill, she said.

‘‘With the increased costs of rubbish removal, some of the students are just taking to dumping it, which is a really unfortunate situation in the student area at the moment.

‘‘That’s not an excuse for them at all to dump their rubbish outside, but when you’ve got no cars and got no trailers and got no way to take it to the actual landfill out in Green Island, it just ends up out on the street, unfortunately.’’

Simple.
Make the University or the landlords pay for it
I shouldn't have to

So true. The DCC should be more proactive on this issue.

No, send the studeants the bill! They have left home now, they don't have their parents around to tidy up after them. Grow up and tidy up your jolly mess! Jeez, get real, do we have to blow their noses for them too? Take responsibility for yourselves, take some pride in were you live. Tenants need to learn, in the early stages, this is how life works.

Is it any wonder nobody can afford to go to the rubbish tip?!!

Students create the rubbish and should dispose of it - not us. The trash Dunedin and walk away.

Not just North Dunedin...also in Roslyn behind the Friday Shop.

Its dumped on the streets right across City Rise of central Dunedin. It must be quite a surprise for our tour group visitors. They must think we all lived in a slum.

How about some creativity? Incoming students need the same kinds of things--couches, chairs, etc. as those leaving. Perhaps the university and the Polytec could arrange storage and then sell off cheaply the goods to pay for their efforts?
Dunedin folk might well consider that these institutions bring in millions of dollars to the city and a bit of help by DCC might help with a few big skips to take unrecycle- able things.