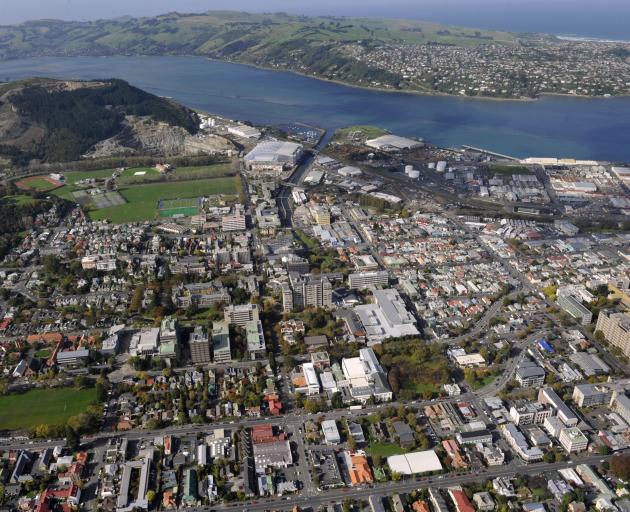 The danger of gas leaks or explosion from lpg storage near the stadium could stymie developers’ dreams. Photo: Gerard O'Brien.
An increased risk of explosions or gas leaks has been raised as reason to continue restrictions on development next to Dunedin’s Forsyth Barr Stadium.

Mr Jackson said relaxing restrictions could encourage development in the area, which could include a hotel.

However, 2GP panel commissioner Kate Wilson brought up a previous submission from Liquigas, which  stores lpg nearby, calling for a 200m "buffer zone" around its site because of the risks of gas leaks or explosions.

Given Liquigas’ concerns, which were shared by other oil companies, she questioned whether the area was suitable for the kinds of development Mr Jackson was suggesting.

Mr Jackson said the same arguments were used against Forsyth Barr Stadium and it was matter of "where do you draw the line".

He had heard previous comments that the University of Otago should not be where it is because of the danger of an explosion at  the lpg storage site.

Mr Jackson earlier told the commissioners the Hagamans’ company, Bindon Holdings Ltd,  which owns  land  next to the stadium, believed relaxing restrictions would encourage development in an under-used area.

The area had huge potential and the site of the former PlaceMakers building on Anzac Ave could be an  ideal spot for a hotel.

"A hotel at this stage doesn’t work there from an economic point of view but we need to look at all those things going forward."

The area’s proximity to the university made it a good place  for an innovation-centred business.

The company supported the proposal in the 2GP for the area to be changed from being campus zone to mixed-use but wanted to further encourage development by increasing  height limits  from 20m to 25m and easing restrictions on entertainment and conference facilities.

"It just gives us the flexibility to go that one storey higher, without compromising any view shafts in the area."

Ms Wilson brought up another submitter’s argument for lower height restrictions in the area close to the harbour, so views of the water from Dunedin’s hills were not impeded.

Mr Jackson said a 25m limit would fit with the proposed limits in the neighbouring industrial and campus zones.