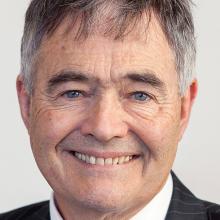 Dave Cull.
Discussion of  a Deloitte report on troubled council-owned companies Aurora and Delta on Tuesday will be behind closed doors, and it is uncertain when they will make it into the public arena.

Mayor Dave Cull said the report was not  finished yet, despite predictions of an early December completion date.

It will be discussed by the Dunedin City Council on Tuesday in a non-public session.

Mr Cull said the Dunedin City Holdings Ltd board got a progress report on the investigation yesterday.

The board would pass on that report at the council meeting on Tuesday.

As well, the withholding of the information was necessary to enable the council to "carry out, without prejudice or disadvantage, commercial activities".

Mr Cull said he did not expect to get a verbal update yesterday, as had been reported.

As well, the report was not yet finished.

"I need to emphasise it is a progress report; it is not the final product."

He did not know when the report would be completed.

He also did not know if there would be an update for the public after Tuesday’s meeting.

"It depends what’s divulged, and what’s been discovered."