Dunedin Mayor Aaron Hawkins addresses Dunedin city councillors, Dunedin City Council staff and members of the public at a full council meeting yesterday. PHOTO: GERARD O'BRIEN
A lot of time had passed and there had been major social and environmental changes since the Dunedin City Council last consulted on putting a landfill near Brighton, a parade of residents told city councillors yesterday.

At a 40-minute public forum session before councillors were due to consider in a non-public session the detailed business case and consent application for a new landfill in Big Stone Rd, between the seaside town of Brighton and Dunedin International Airport, 10 people appeared. 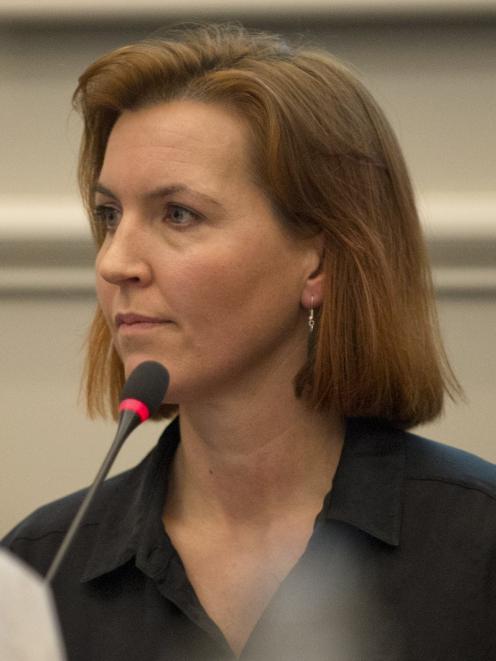 Big Stone Rd resident Sarah Ramsay speaks at the public forum yesterday. PHOTO: GERARD O'BRIEN
They outlined concerns including a perceived lack of consultation, and urged councillors to seriously consider the effect a landfill first proposed 30 years ago would have on the area, and to consider alternative sites and options.

Saddle Hill Community Board chairman Scott Weatherall told councillors the protection of Smooth Hill was "hugely significant" to the community and reiterated the board’s call for an "an open and transparent" process as consent was sought for the landfill.

Otokia Creek and Marsh Habitat Trust trustees Dr Viktoria Kahui, Simon Laing and Anne-Claire Mauger said things had changed significantly since a 1992 report in which the environmental impact of a landfill at Smooth Hill was deemed to be "nil", with the risk of leaching from it considered to be very low except during high flooding events.

Climate change meant more flooding, and many important Maori sites had since been identified in the vicinity.

Big Stone Rd resident Sarah Ramsay rounded out the presentations with a strongly worded reiteration of concerns she raised at a community meeting in Brighton last month.

After the meeting, council acting chief executive Sandy Graham said suggestions of a lack of consultation were incorrect.

"There was public consultation in 1992 and 1993. The designation for Smooth Hill was then subject to further consultation with the notification of the city’s first district plan, and again as part of consultation on the 2GP.

"The issue of Smooth Hill’s inclusion in the 2GP attracted public submissions at the time."

Following yesterday’s discussions, staff would take further reports to the council meeting on August 25 for the councillors to consider.

Kerbside consultation would be discussed in the public part of that meeting, but further discussions about Smooth Hill were likely to take place in the non-public part of the same meeting.

Any funding for the council’s waste futures programme, including for Smooth Hill, would form part of public consultation during the coming 10-year plan, she said.

Not In My Backyard call the locals. Let's put it in someone else's backyard. Well, no one else has had 30 years' notice with regular reminders. I suspect most of these people have shifted into the area since it was first planned. If you shift to an area where a landfill is planned, you should not be surprised when a landfill is constructed. Fortunately for them, a modern well-run landfill is pretty unobtrusive compared to how they used to be.

Not-in-my-backyard has the potential to REALLY protect the environment. Standard of what is environmentally acceptable keep changing and for the better IMO.
Any idea of ‘existing use rights’ permitting serious environmental damage or spoiling neighbourhood amenity values is not in the public interest. The days of the poor people only living on the ‘wrong side of the tracks’ near the smelly and noisy tip have gone - or need to. It’s a foolish bird that fouls its own nest.

This is a rare time when I'm actually on DCC side (although I live not too far from Brighton). Area is not densely populated, location in secluded enough for modern landfill to not be an eyesore, easy access via SH1 also convenient and unobtrusive for nearby residents, 30 years' notice was given. The only concern is proximity to the city - but do we have a better option? Building it on the Taieri Plain would be an environmental timebomb. The rest is either steep hills or more populated areas or natural reserves and landmarks.

FFS I agree. FFS is my sentiment exactly. Had the designation been managed properly and it was on LIM reports that we would sound like whingers. But it wasn't. I had got wind of it though and I contacted Council at the time and was supplied a map of the proposed site, which is completely different to the plan they have now. None of us would have built had we known the proximity.
Outside of our immediate concerns as landowners - Environmentally alone it's not a good idea - on top of a hill that feeds directly into the headwaters for the Otakia (Brighton) Stream and then into Brighton Beach. Plus as per my speech if you do some research you'll find that Dunedin doesn't actually need a new landfill at all. We've got ample capacity if we manage waste properly and collaborate regionally. You'll also find international aviation authority recommends distances of at least 13km (vs 5kms) to a landfill due to bird strike - commercial airlines line up on Big Stone Road. And that there is not sufficient water supply to site for fire service to put out a fire - of which landfills pose significant risk due to methane gas and batteries - not ideal in a working forestry zone. Sarah Ramsay

Very interesting points. Thanks for sharing this Sarah.

I agree that there has been plenty of public consultation about this. If people don't like the idea, then:
- come up with an alternative location
- live with the fact it'll be there (plenty of people live way closer to the current Green Island landfill...)
- move away

Quite simple really. Fact is, it has to go somewhere, and with the city expanding and likely to expand further in the coming decades, it can't really go many other places close to the city, and where it is is probably as far away as it could go - in terms of transportation costs.

Maybe plenty of public consultation ...30 years ago. In the meantime the designation sits there on the land while people are permitted to develop all around the site without any warnings to new people looking to buy and develop in the area. No mention in LIM reports.

It’s not simple at all. Just because they can doesn’t mean they should - there are so many reasons that make the site at Smooth Hill entirely unsuitable. Surely there must be a site further away from waterways leading to Brighton beach and on the flight approach to Dunedin airport that would be a better option.