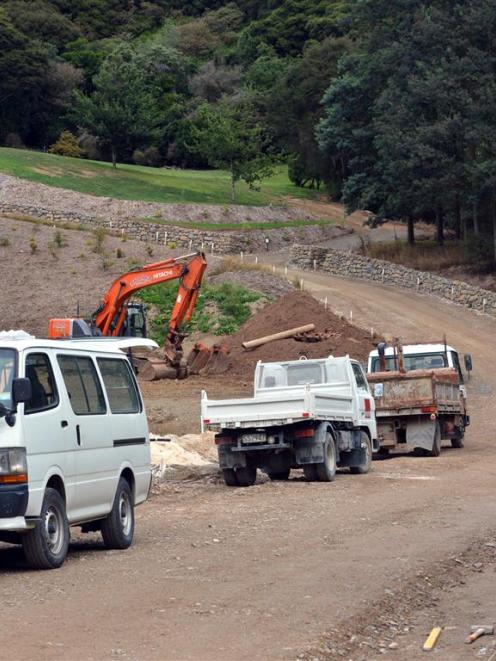 Work continues at the entrance to the Three Hills subdivision in Leith Valley, Dunedin. Photo by Gerard O'Brien.
Some Leith Valley residents are upset a residential subdivision in a quiet, semi-rural street has got the go-ahead without neighbours being consulted.

Three Hills, a 19-lot residential subdivision in Malvern St, is being developed with the hope the first houses might be built by the end of the year.

However, some residents in the area believe they should have been consulted on the proposal.

One said the subdivision would affect the value of his property.

‘‘It will devalue my house,'' the man, who did not wish to be identified, said.

He had tried to approach workers on the site, but claimed he had been met with a ‘‘load of abuse'' and did not get a satisfactory response from the Dunedin City Council.

‘‘If there had of been [a consent process] we would've put a lot of objection into it because we have lost a lot of our birdlife.

‘‘They are working seven days a week. We have our days disturbed.

‘‘The most annoying thing is we have had no chance to object to it, or see any plans at any time.''

Another neighbour said regardless of the legality of the subdivision, ‘‘ethically, it would have been a bit more appropriate to have some neighbours' input''.

Council resource consents manager Alan Worthington said he was comfortable with the state of the subdivision and the process which led to consent being granted.

‘‘Since there was a complaint, we have been on site and taken our engineer,'' he said.

‘‘Generally, subdivisions don't have any affected parties if the land is provided for residential purposes and they are providing complying lot sizes.''

A copy of the resource consent showed public consultation was not required as it was determined any adverse effects would be no more than minor, there were no potentially affected parties and there were no special circumstances in relation to the proposal.

Three Hills Ltd director John Dunckley said he had taken every opportunity to speak to neighbours about their concerns or interest in the work.

‘‘There has been communication,'' he said.

‘‘Anyone who has approached me, I have been more than willing to talk to.''

Concerns workers were on site seven days a week were unfounded as the resource consent contained controlled hours, he said.

‘‘Very occasionally they have done a Saturday morning,'' he said.

He was also unconvinced by concerns about bush or birdlife being lost, as he had planted thousands of natives since buying the site about 20 years ago.

‘‘All these ferns we have planted.

‘‘I wanted to make sure the bush was protected and always had a vision we would subdivide in the future and this is what's happened.''

The site contained two protected areas of bush, which would remain after the 19 lots were sold.

While he was aware of some disgruntled neighbours, he had more neighbours voice their support for the project, Mr Dunckley said.

He hoped the subdivision infrastructure might be completed within four weeks and work on the first building start in spring.

‘‘To me, we are doing something that's within our resource consent,'' he said.

‘‘When you live in an area you will get people who get resource consents to do things. It's just a fact of life that these things happen.''