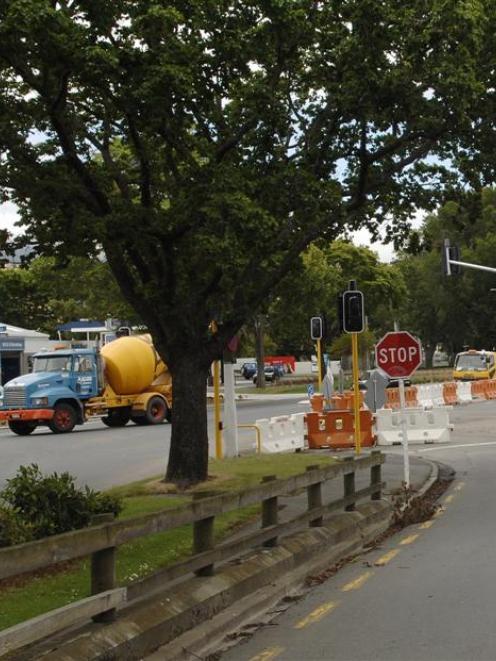 The traffic lights at the Frederick St intersection with Anzac Ave and State Highway 88 have stayed switched off, because of a dispute set to drag on into next year. Photo by Linda Robertson.
A set of traffic lights in Anzac Ave, in Dunedin, will not join the Christmas light shows, with a dispute between the Dunedin City Council and a local businessman ensuring they stay switched off.

And the lights would stay that way into the new year, council city environment manager Tony Avery said, meaning they will have stayed shrouded in plastic covers for about six months.

In August, Mr Avery confirmed a High Court injunction had been obtained by Anzac Ave landowner Doug Hall, stopping the council from commissioning the lights at the Frederick St intersection with Anzac Ave and State Highway 88.

Court documents showed the council and Anzide Properties Ltd, of which Mr Hall is the sole director, as the entities involved in the dispute.

The council was in discussions with the landowner, and because the matter was subject to a High Court order, Mr Avery has been unable to say much about the matter since.

In September, he said mediation was underway as both sides sought to resolve the dispute before the next court dates, which had been set down for October 26 and 27.

Mr Avery said yesterday the court session had been "deferred".

An employee of a local business told the Otago Daily Times the issue related to the entrance to a yard Mr Hall owned, next to the lights.

Mr Avery said negotiations were continuing, and "we are hopeful of a resolution".

Asked why the issue had dragged on for so long, Mr Avery said the two parties were trying to work through the issues.

"We have people looking at the options."

How long the process might take, though, was "indeterminate", he said.