The 46-year-old will graduate from the Otago Polytechnic with a doctorate of professional practice today, making him the institution’s first doctoral cap.

When he was 16, he left school and enrolled full-time at the Otago Polytechnic, doing cooking trades training before going on to become an award-winning chef in some of New Zealand’s top restaurants in the 1990s and early 2000s. 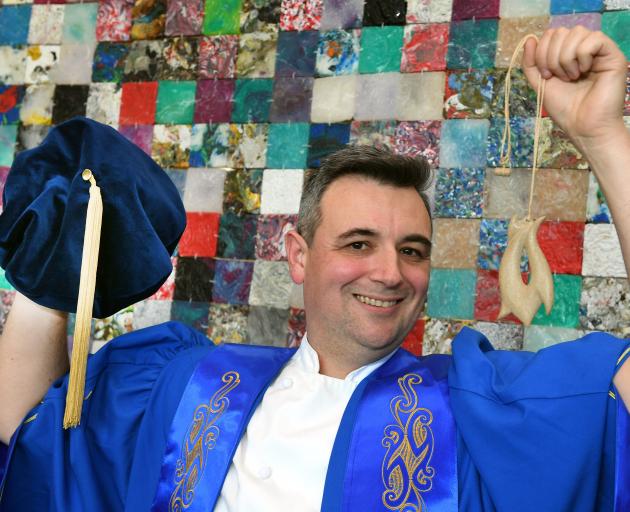 Adrian Woodhouse tries on newly designed regalia which he will wear when he becomes Otago Polytechnic’s first doctor of professional practice at today’s graduation ceremony at the Dunedin Town Hall. PHOTO: STEPHEN JAQUIERY
For the past two decades, he has taught culinary arts at the polytechnic and is now academic leader of the food design institute bachelor of culinary arts programme.

But before all of that, when he was just 14, he had already started his first polytechnic course — a night class in bone-carving.

"I’ve gone from studying as a kid, to trades training, to doing a bachelor’s, a master’s, and now a doctorate.

"I’ve clocked the game, so to speak — all at Otago Polytechnic, where I still teach."

To mark his academic journey, and to pay tribute to his doctoral supervisors, he said he had "come full circle" and returned to bone-carving in recent weeks.

"I hadn’t picked up my tools in all those years. But I was inspired to create carvings for these people, who have been such powerful forces in my academic journey."

Mr Woodhouse presented the carvings to his three supervisors at a pre-graduation ceremony at Otago Polytechnic yesterday.

Mr Woodhouse said he was a descendant of a Kai Tahu woman and a European whaler, and his project looked back through the generations since that marriage, uncovering almost 200 years of cultural assimilation that had left him questioning the validity and legitimacy of his Kai Tahu identity.

He said the project was an insider’s perspective from a self-labelled "white guy" who was reclaiming his Kai Tahu identity while exploring what it meant for his personal and professional life.

He will be one of about 2500 people who will graduate today.