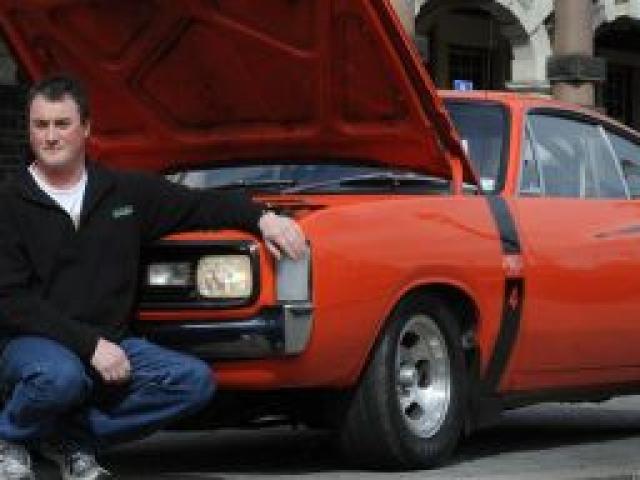 Glen Rayner with his 1972 Chrysler Valiant Charger R/T E49 outside the Dunedin Railway Station. Photo by Peter McIntosh.
To the untrained eye, it looks just like the General Lee.

But that is best left unsaid, because if Glen Rayner hears you talking about his orange 1972 Chrysler Valiant Charger R/T E49 in the same sentence as the Dukes of Hazzard, he'll have to put you straight.

"I look with scorn at anyone who says it looks like a Dukes of Hazzard car.

One's made in America, and my one was made in Australia."

Mr Rayner's Charger has a Hemi 265 six-cylinder with a carburettor for each cylinder and a four-speed manual gearbox. The car can pump out about 320bhp and reach 100kmh in about six seconds.

"It was the fastest accelerating six-cylinder production car in Australia for 30 years.

"It wasn't beaten until the turbo-charged XR6 Ford Falcon came along in 2002."

The car's track record makes it one of the most prized possessions among car collectors. There are only 23 left in New Zealand.

"It's a great investment. But I didn't buy it as an investment. I just wanted one because it's my dream car."

Given its rarity and value, Mr Rayner seldom drives the car.

But this weekend, it will be taken on a special outing to Timaru where it will be one of about 14 put on display to celebrate the 40th anniversary of the Valiant Charger.

Mr Rayner said the cars would be brought from as far away as Christchurch and Invercargill, and while he was looking forward to catching up with other Charger owners, he was more excited about the drive from his Mosgiel home to Timaru.

"It's a real head turner.

"Driving it is the best fun you can have."