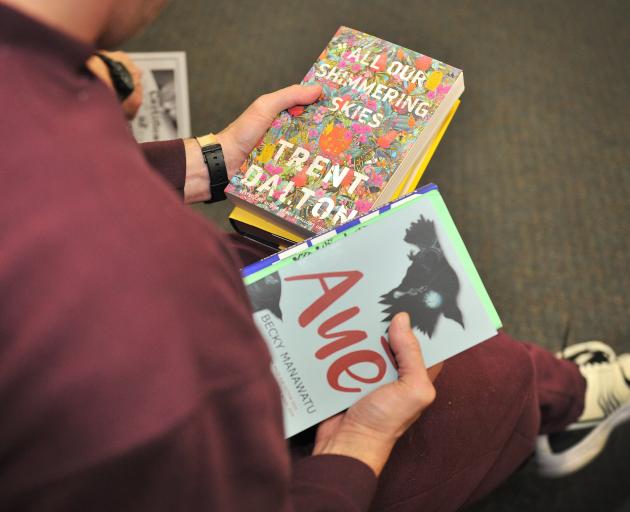 The winner and writers who were highly commended received a literary prize haul to spark further inspiration. PHOTOS: CHRISTINE O’CONNOR
A prisoner in his 40s claimed first prize in both the poetry and short-story categories of New Chapters. He spoke to Rob Kidd.

What was it like to find out you had won not only one but both prizes?

I always knew I was going to win it. Haha.

How much writing have you done in the past?

Where it all started was when I did a programme in Invercargill Prison and some of my English exam curriculum was to write short stories. I did a couple of stories there and my teacher recognised I’ve got a talent for words. She was the one that cottoned me on to writing, so from there I’ve always had a passion for it.

What does writing mean to you?

It’s an escape from prison. It’s going into your own world in your head and living. I don’t know how other people write but I’m living it. It just takes you away from wherever you are.

The judges commented how effective your endings were in both your short story and poem. How much work went into crafting those finales?

I was doing a music course in here. I did that in five minutes. It was a song idea — write a letter to your younger self, so that came real easy.

The story is the retelling of an old Maori story just with a 2000s twist to it. It’s an old family story, so I just adjusted it. It’s a bit of a plagiarism really! I had difficulty keeping it to 600 words. The ending was the hardest part. We came to wananga and were learning about the power of karakia and how the tohunga used it back in the day, and it just flicked a light on in me. It just felt like it was meant to be.

What is it like to know thousands of people will be reading your words?

What do you hope the public get from reading New Chapters entries?

I just hope they understand you’re hiding your talents away. There’s so much talent and potential in here.

I’ve got books in me that I want to write; non-fiction and fiction. To be an investigative reporter has always been a goal of mine. I just have trouble staying out [of prison].