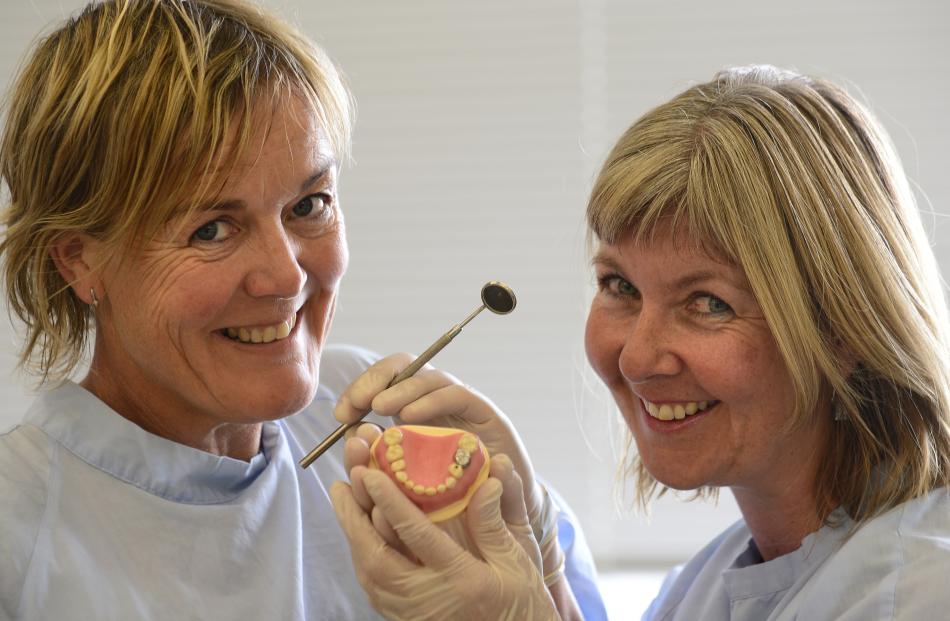 Dr Lyndie Foster Page (left) and Dorothy Boyd, of the Dunedin Dental School, have carried out research on a new needle-free and drill-free dental technique for treating tooth decay in children. Photo by Peter McIntosh.

A new method of treating tooth decay, which does not involve the use of needles or drills, reduces children's anxiety about going to the dentist, University of Otago research has found.

Otago University head of preventive and restorative dentistry Dr Lyndie Foster Page and colleague Dorothy Boyd carried out the research. Nearly 190 Hawkes Bay children aged between 5 and 8 took part. Of those, nearly 100 children were treated for tooth decay using the new technique, while the remainder were treated using conventional methods. The study was funded by the Health Research Council of New Zealand (HRC).

The new method, called the Hall technique, involved placing a stainless steel crown over a baby molar tooth to seal in decay, as opposed to removing decay with a drill and then placing a filling. Starved of nutrients, the decay then stopped or slowed down and the crown stayed in place until it fell out naturally with the tooth when the child was about 10.

Dr Foster Page said those treated in the new way reported less ''dental anxiety'' than those who had received conventional care. Overall, 90% of those treated with the Hall technique reported enjoying their clinic visit, compared with 52% of those conventionally treated.

Using the technique could bring long-term benefits in dental health, she said.

''If children don't fear going to the dentist, we believe they'll be more inclined to go regularly for check-ups when they are adolescents and adults.

''But there is more work to do to understand exactly why the children said they preferred the new technique,''As well as reducing the fear factor, the new technique was up to 20 minutes quicker and had a higher success rate.

The crowns cost more than conventional amalgam or white fillings, but could work out more economical in the long term, due to the higher success rate, she said.

Dr Foster Page said further research was needed before a decision was made on whether to introduce the technique nationally and the pair had applied to the HRC for funding to carry out more detailed research.vaughan.elder@odt.co.nz