Dunedin is 'best place for family' 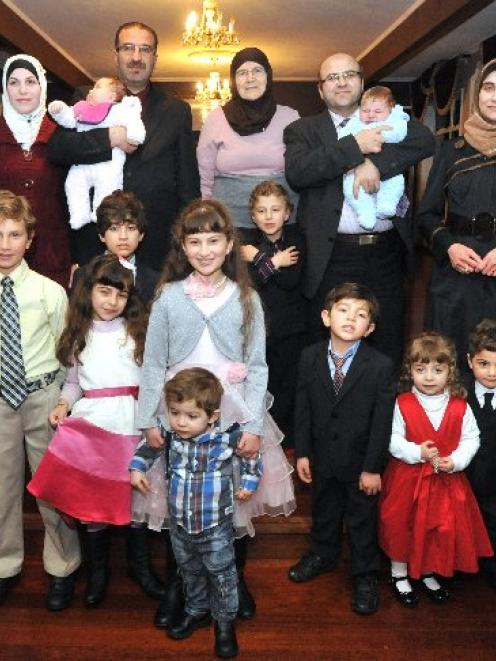 He fell in love with the city and its people so his family shifted over nine months later.

He had originally planned to return to the Syrian capital Damascus, but when the situation there quickly worsened he realised it was time to get his wife, children, his mother, brother and his children out of the danger zone, he said.

"I felt my family would do better here than to live anywhere else.''

Six of the families' 11 children attend Wakari Primary School. And both families welcomed a new addition this year.

Although Mr Taha felt huge relief to have them safe in New Zealand, he now feared for his brother, sister and eight nieces and nephews who remained in the war-stricken capital.

He would do anything to get them to New Zealand.

''I am trying to get them here, because their children are really at risk. You never know what is going to happen the next day. You just fear when something bad happens. You're always on edge.

''My brother's children, a few times they were shot at by tanks while they were travelling in the car.

The Syrian conflict erupted in March 2011 as an uprising against President Bashar al-Assad and transformed into a civil war. Before the outbreak, Syria had a population of about 23 million.

Two million Syrians have since fled to neighbouring countries and five million have been displaced within the country, according to the United Nations.

Mr Taha said he had contacted Immigration New Zealand seeking advice about getting his family to New Zealand.

He enjoyed the friendly, peaceful and relaxed approach of New Zealanders.

''Dunedin is the best place I can dream for my family. It is a family town, beautiful scenery, beautiful people.

''Dunedin, in particular, is a young city and will never get old because of the university. It has vibrant characteristics and it is safe.''

He and his family had previously been opposed to leaving Syria as refugees, but the situation had become desperate and that would now be an option.

''I don't care if they come as a refugee or whatever. I just want them out of danger.''

US President's Barack Obama's latest announcement for US involvement in Syria was too little too late, Mr Taha said.

''I think it has taken longer than it should have and they should have intervened when it started in better ways. I don't think we would be in this position if he [Assad] was stopped earlier.''