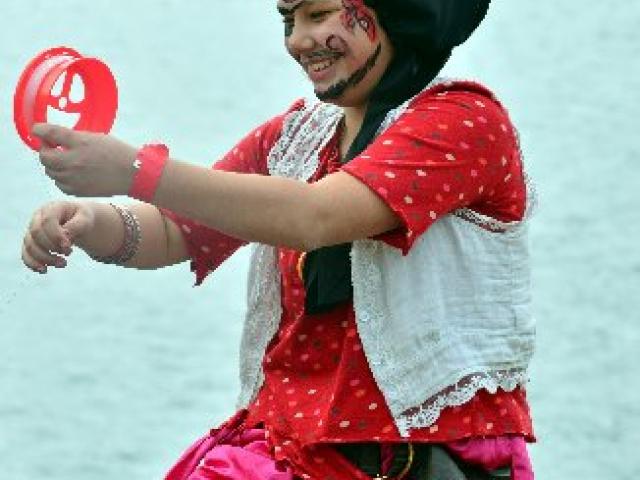 More than six thousand people gathered in Port Chalmers on Saturday for the Seafood Festival, which featured fine weather, celebrity entertainment and plenty of ... seafood.

Three talented Dunedin film-makers have been awarded grants from the BBC to produce their own documentary ideas featuring New Zealand characters.

Dunedin cyclists will be safer if a dedicated cycleway is given the go-ahead by the Dunedin City Council, cycle advocates say.
Wingatui racecourse groundsmen are keeping busy ahead of November's Melbourne Cup race day.

One of Mosgiel's long-serving posties celebrated 30 years in the job at the weekend and says mail delivery still has a future.

Some Dunedin home owners received an unwelcome visitor when a furniture removal truck struck the side of their house on Saturday morning.

Designer belly button clips are being sold by a Dunedin couple who are looking to take the concept worldwide.

Go you good things ... Team New Zealand is just one win away from winning the America's Cup.

One of the South Island's biggest arts and cultural events, the Otago Early Childhood and Schools Maori and Pacific Island Festival (Polyfest), is being held this week.

One of Hannah Wilson's favourite pastimes is op-shopping, but every item she picks up an item from a rack a voice inside her asks ''do you really need that?''

The Otago Volts will have at least two fans in India during their Champions League campaign as two Queenstown cricketers are flying over with high hopes.

A wise man and his beard are rarely parted. But, at the end of Otago's ITM Cup campaign, three of the team's hairiest faces will be shaved clean for a worthy cause.

Josh Bethune must wait five years until he can sit his driver's licence, but he already reaches speeds of up to 87kmh.
Power has been restored to most customers in Otago after widespread cuts caused by Tuesday's wild weather.
Berwick Primary School closed 16 years short of its 150th birthday, but the community and past pupils will celebrate the anniversary in November anyway.

A mix of retirees and families on her quiet Mosgiel street suits Irene Brown ''down to the ground''.

Chewy the bluetongue lizard has returned home after a seven-month nap - only to find his spot has been filled by another family pet.

Fifty saddlebacks arrived safely at the Orokonui Ecosanctuary yesterday after a journey by boat and helicopter that began on Tuesday.

Otago rugby stole all the limelight in Ranfurly Shield week but its relative has been achieving under the radar.

Neurosurgeon Ahmad Taha never planned to swap his life in Syria for Dunedin, but three years after moving here he is thankful he did.