Rugby: Brothers in beards, for a good cause 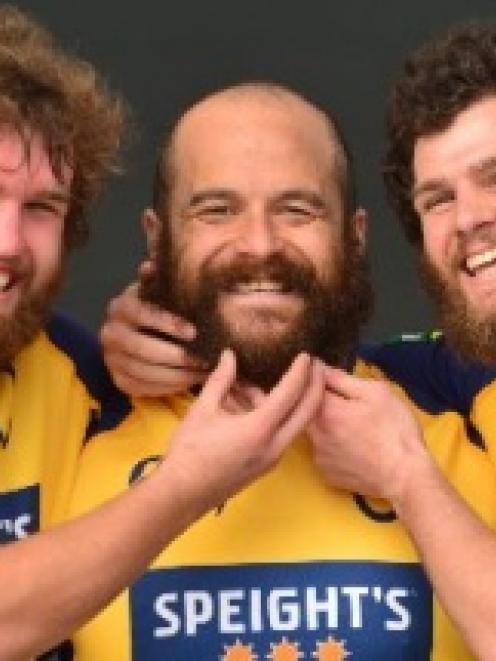 Otago players (from left) Liam Coltman, Tama Tuirirangi and Kieran Moffat embrace the beards they have nurtured this season. Photo by Peter McIntosh.
A wise man and his beard are rarely parted. But, at the end of Otago's ITM Cup campaign, three of the team's hairiest faces will be shaved clean for a worthy cause.

Kieran Moffat, Liam Coltman and Tama Tuirirangi have three of the most impressive beards in the game.

In fact, those who have followed Coltman's career will barely remember what the young hooker looked like underneath the whiskers.

The trio have each promised to lay off the razors for the remainder of the season, before shaving to raise money for children's rehabilitation at Dunedin Hospital.

Moffat mentioned the idea at training last week as he had always wanted to help people in need.

''It come about because, with my rugby going well this year, I have always wanted to be able to use my status, I guess, as a way to give back to people in need.

''It's about making people happy and brightening someone's day.''

This is the first year Moffat has grown a beard. It has gone so well that his team-mates call him Wolverine - the character Hugh Jackman portrays in X-Men movies.

While Moffat has enjoyed the attention and banter among his mates, he said his girlfriend would happily be his No 1 sponsor to get rid of it by the end of the ITM Cup.

Tuirirangi, who has never ''manscaped'' his beard, said clippers would need to be the first tool used before Moffat's choice of the ''old school blade'' shave.

While Moffat and Tuirirangi have been growing their beards since March and April respectively, Coltman has had his for several seasons, but ''trimmed the edges between seasons'', he said.

He was hesitant to part with his beard because it ''felt nice'', but would do so for a good cause and because it ''would grow back quickly''.

Fans keen to sponsor the Otago rugby players' beard-shaving cause can ask at any ANZ branch about the Bearded Brothers foundation.