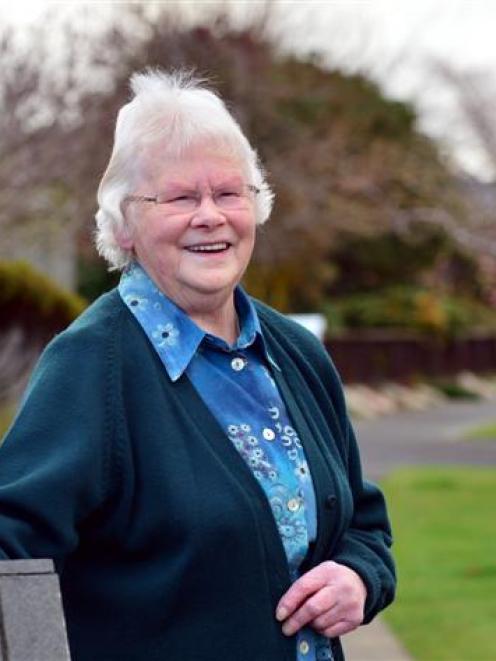 Irene Brown (82), of Mosgiel, at 104b Church St, where she has lived for 20 years. Mrs Brown says the people are friendly and the climate is good. Photo by Peter McIntosh.
A mix of retirees and families on her quiet Mosgiel street suits Irene Brown ''down to the ground''.

Mrs Brown has lived in Church St in the central town since the 1990s, when she and her husband Peter moved from Fairfield after it became ''a little too busy''.

They had run Brown's Book Shop in Fairfield for more than 20 years and decided to buy a home in Mosgiel in 1993 because to them the town ''had everything''.

They bought a new house in Church St and made it their home.

Mr Brown died in 1995, shortly after their move to Mosgiel, but she had remained in their home since and still found Church St a comforting place to live.

Also, the climate in Mosgiel was ''great'' because of the surrounding mountains and suited her.

''It really is quite like Central [Otago]. We do get the frosts, but we get the nice days with it.''

She liked the location because she was close to her family in Dunedin, and was looking forward to the arrival of her first great grandchild.

Originally from Southland, Mrs Brown said she considered herself a ''half-caste'' of the two provinces, but has made Otago and Church St her home.

It will soon feature a new Countdown supermarket.