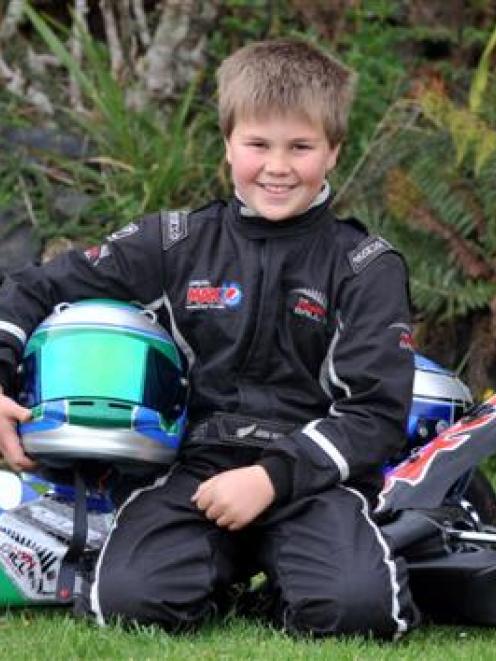 GP kart star Josh Bethune who will head to the United States in November to compete in the cadet class at the Superkarts USA supernationals in Las Vegas. Photo by Craig Baxter.
Josh Bethune must wait five years until he can sit his driver's licence, but he already reaches speeds of up to 87kmh.

Josh (10) will head to Las Vegas in November to compete as the only New Zealand youngster in the cadet class at the Superkarts USA supernationals.

His aim is to make the top 40 of 90 cadet racers from all over the world and gain more experience at top level.

The championship, which has attracted 900 competitors, is dubbed the top karting event of the year and is held on a world-class temporary track built in the car park of the Rio Hotel.

Josh said one of the best things about being good at what he did was missing a few days of school.

The year 6 Wakari Primary School pupil loves going to school, but prefers the excitement of the racing track where he can drive as fast as he is able.

Josh began racing four years ago when he was only 6, because his father, Richard, and grandfather, John, were both keen on karting.

Since then, he has won numerous trophies, cups and titles - one of his latest and best being the mainland title last month.

Josh's parents and his sister, Kara, will join him in the United States for a holiday that will include a visit to Disneyland and water-theme parks.

He said he was the same as his friends at school, apart from the fact he was ''lucky that I miss school''.

His mother, Tania, said he had the competitive streak of his idols as well as the sportsmanship.

''The main thing is that he enjoys it.''