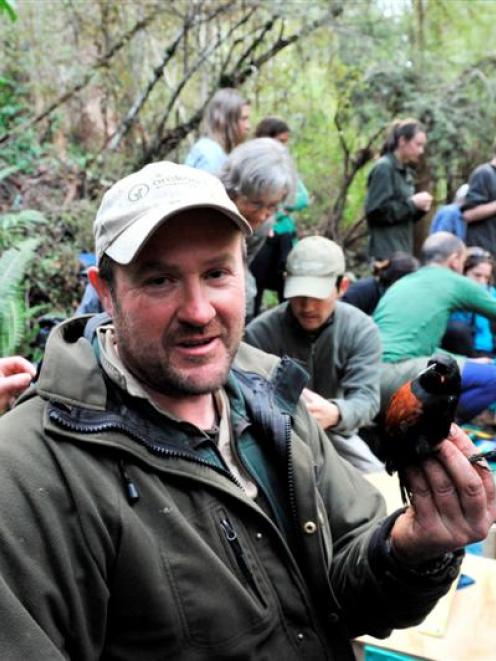 The birds arrived from Breaksea Island in Fiordland where hundreds of the species exist.

The arrival had been planned for two years.

Sanctuary conservation manager Elton Smith released the first 32 birds at 4.30pm and was pleased to see they did not shy away from the many onlookers.

Mr Smith, who accompanied the birds from Fiordland, said the trip had been stressful for him and the birds, and he expected some of the birds would have died during the trip.

''They've had a really intense time and I won't guarantee every single bird here will be alive.

''They've had a tough time so be prepared for a few deaths.''

To everyone's delight, in the 16 cages opened, each bird survived the trip. The remaining cages would be opened and the 18 birds measured and tagged before release. Each cage held two saddlebacks.

Ian Jamieson, of the zoology department at the sanctuary, said yesterday was ''the moment they had all been waiting for'' the past two years.

The birds had not been on the mainland since the 1990s, and Mr Jamieson said it was anyone's guess how they would adapt at the sanctuary.

It was important for their survival that each bird remained inside the fenced area.

''If they fly over the fence, they're not going to make it,'' he said.

It was too early to know the gender ratio of the 50 birds, but breeding season would begin in less than a month.

If the birds mated, it would take 21 days for the eggs to be released and a further 20 for them to hatch. Orokonui general manager Chris Baillie said yesterday was one of the biggest moments in Mr Smith's career and the sanctuary's existence.

''This is an awesome moment.''