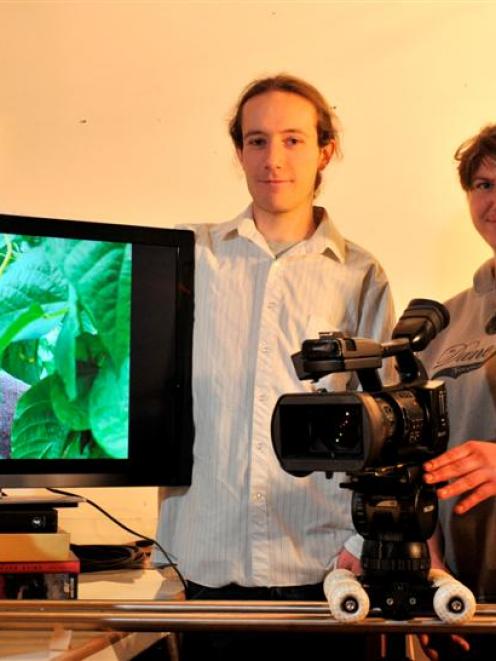 Dunedin film-makers Max Bellamy and Rachael Patching in their Dunedin premises. Photo by Linda Robertson.
Three talented Dunedin film-makers have been awarded grants from the BBC to produce their own documentary ideas featuring New Zealand characters.

Joey Bania, Max Bellamy and Rachael Patching are among the five New Zealanders awarded the $6050 grants as winners of the BBC Young Producers Award.

They will each produce a short documentary on South Island people with interesting backgrounds which will be aired on the BBC in February.

Miss Patching was pleased with the award and said the hard work had paid off.

''To have three from Dunedin is quite unheard of.

''I wouldn't say it was expected, but I definitely put in a lot of work to find a good local story.''

Miss Patching's short film The Dirt Doctor is about Jim O'Gorman, a scientist based in Canterbury who worked with soil and in microbiology.

''He is a really gorgeous character and intelligent person to be around ... the story is very topical in terms of New Zealand's state of farming practice.''

It was an honour to be working with the BBC and the award would help show New Zealand abroad, she said.

The films being based on personalised stories showed there was ''a changing landscape'' in the film industry, she said.

Miss Patching had been in the industry for 10 years and was a graduate of the science communications degree course at the University of Otago.

She hoped the grants would show other aspiring film-makers that there was talent in Dunedin. ''If you have a good idea, you can get the right people's attention from anywhere.''

''It's quite a coup for Dunedin and our local film-makers. To gain three out of five grants - we're quite proud of it.''

Mr Bellamy, a Dunedin School of Art graduate, would be working with another Dunedin film-maker, Ollie Lucks.

He was also a graduate of Otago University.

New Zealand's other winners were Hilary Crombie, of Auckland, for her film From Nurse to Hearse and Ashley Pitman, also of Auckland, for his Beard Chronicles. BBC senior communications executive Nicole Hurren said the purpose of the competition was to profile distinctive Kiwi characters who reflected the free-thinking essence of the BBC Knowledge brand.