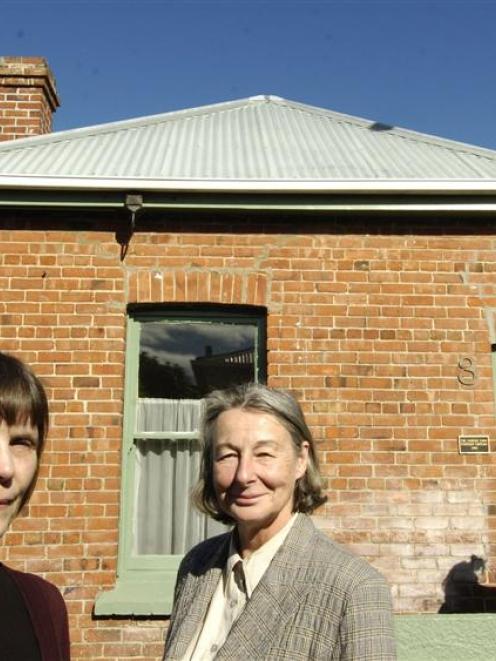 Friends of Robert Lord Writers Cottage co-ordinator Claire Matthewson (left) and cottage trust chairwoman Nonnita Rees (centre) stand outside the tiny cottage in Titan St, Dunedin, while former writer in residence Tania Roxborough looks on. Photo by Peter McIntosh.
One writer enjoyed her stay at the Robert Lord Writers Cottage so much, she and her family sold their Auckland home and moved to Dunedin.

Friends of the cottage co-ordinator Claire Matthewson said all 19 writers who had been in residence at the cottage during the past five years had "just loved it''.

It seemed to be a good place to write and most of them said they had got much more done than they had expected, she said.

Friends and trustees of the Titan St cottage held an open day on Sunday to show people what had been achieved at the writers' residence since it opened in 2003.

While there had been some strengthening work and interior renovation, many quirks of playwright Robert Lord, who died in 1992, still remained in the tiny three-roomed cottage.

A high light switch in the kitchen - which many of the writers in residence had been unable to reach - was testament to Lord's height, while a stainless steel bath resembling a sheep-dip and an outdoor shower installed by Lord still remain.

Trust chairwoman Nonnita Rees said there had been much community help with upgrading the building.

Writers stayed in the cottage rent-free for anywhere between three months and one year.

The latest writer in residence had been Gerry Evans, who was working on a biography of Noel Hilliard.

A visitors book in the cottage made interesting reading and many of the writers had left lengthy stories about their time in Dunedin, Ms Rees said.

The first words in the visitors book, from children's writer Pauline Cartwright, read: "The cottage, which initially had appeared so derelict in its tiny shabby street, has turned out to be marvellous. I love it.''