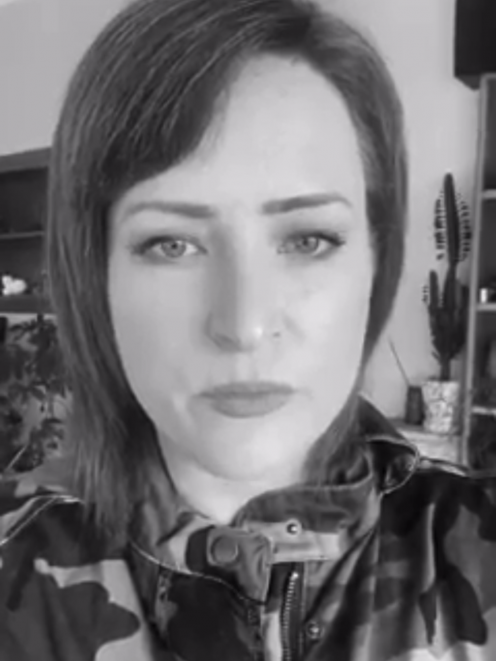 Lauren Bransgrove.
A Dunedin nurse who posted a video to social media declaring war against Covid-19 vaccinators has made an emotional public apology.

Registered nurse Lauren Bransgrove said fear rather than reason drove her to post the video, in which she called medical professionals taking part in the vaccine rollout her "enemies".

Multiple agencies are investigating after the registered nurse posted the video, and she has been referred to a professional conduct committee by the Nursing Council after posting threats against medical professionals involved in the rollout.

This morning she apologised.

"I am a law abiding parent who has let their emotions get the better of them and I will ensure this does not happen again.

"I am wholeheartedly sorry to all."

In the video she said she was in a rage and called on the Prime Minister, the Covid-19 Response Minister and the Director-General of Health to "cease and desist" in the rollout of the vaccine to five-11-year-olds.

This morning she said when she read about the vaccine rollout to young people using buses at schools she became emotional and responded without taking time to consider the effect of her reaction.

"Being a parent of two children within the affected age group, my fear drove my response rather than my reason.

She tried to remove the video the morning after the post, but was not successful, she said.

"Although I have concerns about the safety of this vaccine, I need to show respect for those who choose to have their children vaccinated and to those that are providing the vaccines."

The Ministry of Health is aware of the matter and has said it is concerned.

Police, ACC and the Nursing Council are also aware of the post.

Ms Bransgrove said she wanted to reassure everyone she would not approach or intrude on any vaccination buses at schools or elsewhere.

"Nor will I make any future videos on these matters as I fully appreciate the harm that could follow."

In the video, Ms Bransgrove, under the pseudonym Lauren Hill, called on fellow anti-vaxxers - referring to them as "the resistance" - to organise and prepare to monitor schools every day so they could attack vaccination buses when they turned up.

"We do everything we can to stand in the way of you injecting this poison into our children. We will rip the bribes from your hands, we will slash your tyres, and we will remove the poison from the truck. This is not inciting violence, this is inciting self-defence, especially for our youngest people.

"So cease and desist now, because this is war. And to the doctors and nurses that are still allowing this to happen, that have seen what is happening in the hospitals and refuse to speak out, I do not consider you a colleague, I consider you an enemy," she said during the two minute and 23 second long rant.

The vaccine would be one-third of the dose of that administered to those 12 and older, of which more than 7.8 million doses have been given in New Zealand.

The vaccine has been deemed safe and effective by the vast majority of experts, in New Zealand and globally.

While the risk of serious Covid-19 infection is far lower among children, Covid-19 has been one of the top 10 causes of death of children aged five-11 in the United States over the past 12 months.

A large study of children in the United Kingdom aged 11-17 also found as many as one in seven might still show symptoms of the illness three months after infection, commonly known as Long Covid.

So far, millions of doses of the vaccine have been administered to children aged 5-11 in the US.

Medsafe says it has completed its initial assessment of the application and has received a response to its request for additional information from Pfizer. It intends to make a decision regarding approval this month.