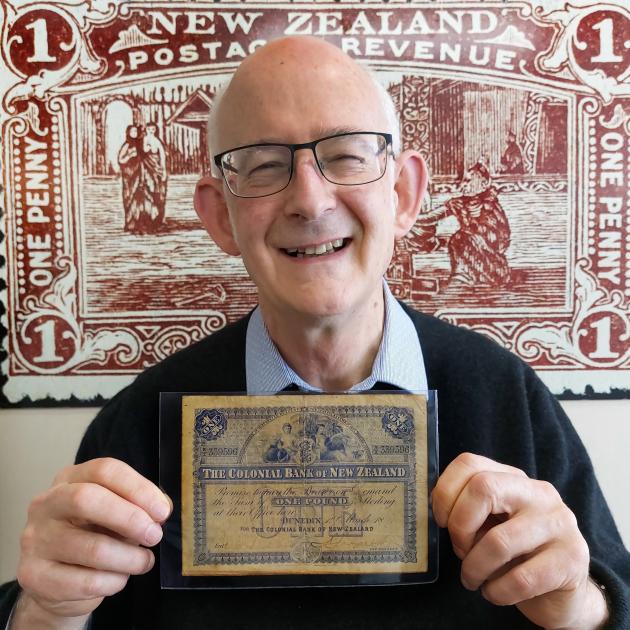 Mowbray Collectables coins, medals and banknotes director David Galt inspects an 1891 Colonial Bank one pound note from Dunedin, which will be auctioned on Friday. PHOTO: SUPPLIED
In its day, an 1891 Dunedin Colonial Bank one pound note could buy you a couple of pairs of boots, rent a 5-roomed cottage for a week, maybe even buy some top-of-the-line gold-mining equipment.

With inflation taken into account, it had the spending power of $214.13 in today’s currency.

But because of its rarity, these days it is estimated to be worth about $8000, and Mowbray Collectables coins, medals and banknotes director David Galt said it could sell at auction for even more.

The rare note (Lot 507) will go under the hammer at the Mowbray Collectables international coin, banknote and medal auction in Wellington and online this Friday.

The Colonial Bank was founded by Otago business people in 1873, including William Larnach, and stayed in business until 1894 when it hit hard times.

The note was one of only three known to be in private hands, Mr Galt said.

"These are all extremely rare and I can hardly believe we have another one of a different type now.

"Very few issued bank notes from any Dunedin banks come on the market," he said.

Other rarities in the catalogue include the first decimal note signed by a Reserve Bank governor — the $10 with serial NJR 000001 signed by Sir Spencer Russell.

There were also four mint pattern New Zealand one dollar coins, which were struck as trials between 1982 and 1986.

They were never circulated as currency, but had estimated values of up to $3000 each.

Ah, the silver standard. A dollar saved today will be worth less a fraction of a dollar in 130 years' time. However a pound (with a literal equivalent in sterling silver) put aside in 1891 is now worth hundreds of dollars in today's money (putting aside the numismatic value of the historical artifcact that is the paper note itself); that is, it has actually held its value constant in terms of purchasing power.