0 Comments
Two police officers, one of whom was off duty, were at the scene of the stabbing at a Dunedin supermarket and were among those who stepped in, police say.

The 42-year-old man accused of stabbing four people at the central Dunedin Countdown has been remanded in custody.

He briefly appeared in the Dunedin District Court this afternoon to face four charges of attempted murder.

Dr Stephenson said all stabbing victims remained in hospital - three in a serious but stable condition, one in a moderate condition.

All four had required surgery and would have "ongoing consequences". 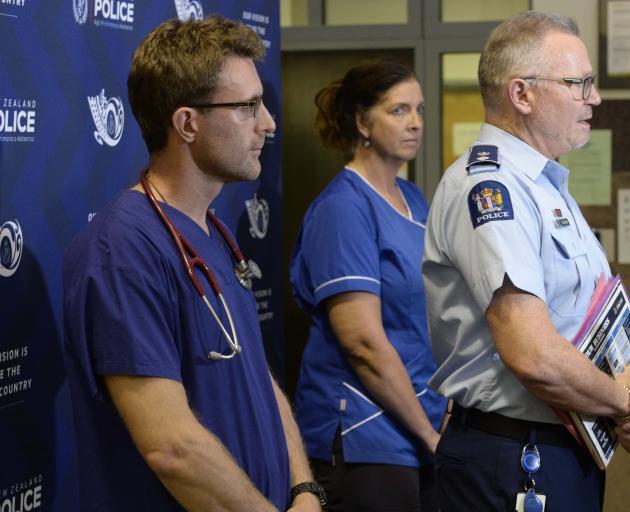 Southern DHB emergency department clinical director Dr Richard Stephenson, nursing lead Janet Andrews and Southern district commander Superintendent Paul Basham spoke to media this afternoon. Photo: Gerard O'Brien
Supt Basham said two police officers, one of whom was off duty, were also at the supermarket at the time and also stepped in - their actions helped deescalate the situation and minimise any further harm.

"Other staff were on scene very quickly and feedback indicates they provided a high standard of first aid that almost certainly saved lives.

Supt Basham said police would not normally encourage bystanders to intervene in an attack and instead contact police, but he was reluctant to be critical of the actions of bystanders who helped yesterday.

"I think they all showed a tremendous degree of bravery and selfless sort of courage that I'm certainly not going to criticise them for... in this situation I think they were heroes."

He said first responders on the scene provided a high standard of first aid that "almost certainly saved the lives of some of the victims".

"When they arrived there was obviously a lot of activity and confusion," he said.

"It was a challenging and confronting scene, the sort of thing we don't do on a regular basis.

"It was out of the ordinary … they took a bit of a pause when they first arrived, and then forged on."

Mr Third said St John staff who attended were "doing fine" today and were expected back for night shift this evening.

"Everyone's thoughts are with the patients and their families," he said.

Mr Third said frontline staff were "professional and well trained" and did not hesitate going into a scene to help the injured, even when the alleged offender was still present.

He said St John worked "closely" with police to ensure safety for everyone at a scene.

"Usually they just get on with it … they did a rapid assessment, treated the patients and transferred them (to hospital)," Mr Third said.

Supt Basham said he had met with Countdown team members and executives and they were working on a community impact plan. Countdown yesterday said there had been a dramatic increase in verbal abuse and violence towards its staff in the past year or so.

He said police today were examining the scene at Countdown and gathering evidence from the scene was a top priority.

"This includes photography, blood sampling and the collection of any discarded items."

He reassured the public they no longer needed to worry about the location of the knives.

They were also working to identify and talk to as many witnesses as possible, he said.

"And of course the victims in this matter who remain front of mind ... we are currently assessing how best to support them [the victims] and their whānau."

Among those attacked were two Countdown staff and a Corrections officer.

Witnesses described the incident as "terrifying".