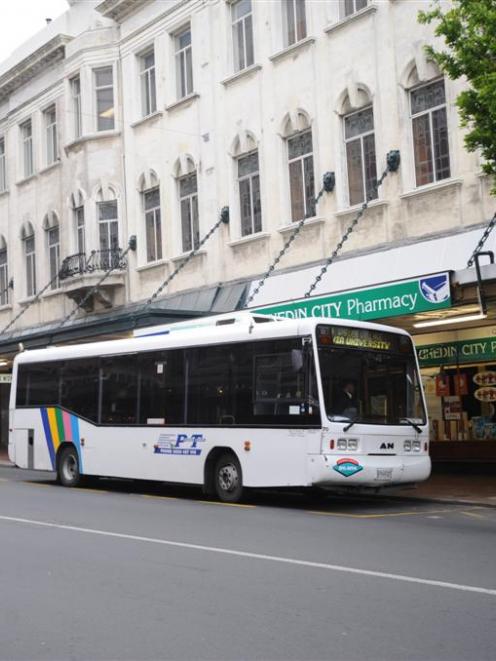 This Princes St block, south of the Octagon, is one of the bus issues facing a Dunedin City Council-Otago Regional Council working party. Photo by Peter McIntosh.
Dunedin's bus system could be in for some major changes as the focus moves from parking to the public transport system.

Options raised range from a bus transfer station at the former chief post office, or in Great King St, to an electric bus linking each end of the central business district.

The result would be to get buses off central-city George St.

The city council heard yesterday shops in that block were battling for existence after the bus stop was lengthened, with bus drivers stopping with the engines idling, spewing fumes and cutting shops from view.

Cr Michael Guest told the meeting the working party dealing with the issue had not had enough time to solve the bus problems.

It was aware "of that vexed block" south of the Octagon, and had considered how to fix the problem quickly.

But every option brought its own problems.

An electric bus running through the central business area was one idea raised, he said.

Cr Syd Brown said the council needed to look at the situation "with a new set of eyes".

In the past, solutions for buses were about providing the best service.

The parking issue was not considered.

Cr Fliss Butcher asked how pollution from idling buses would affect the Savoy building, and Cr Richard Walls questioned the decision to put such a lengthy bus stop outside the Savoy.

He suggested the stop be returned to its previous size.

He was told the area had been increased to accommodate the larger buses now used.

Cr Walls's recommendation that interim measures be looked at to help the shops in the Princes St block was passed.

Cr Brown warned it was "not as simple as moving bus stops around", as that affected bus timetables.

His motion the joint council subcommittee be reconvened to look at the problems was carried.

After the meeting, Cr Brown said the problem required "blue-sky thinking", with options including a bus transfer station away from George St.

Cr Guest said he hoped solutions for Princes St might be suggested before Christmas.