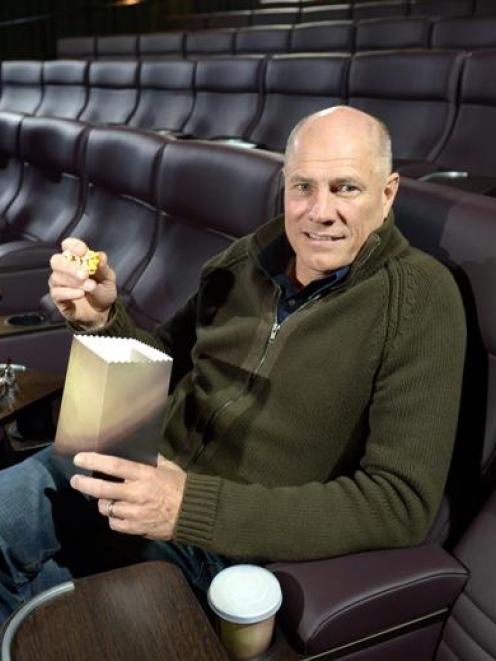 Reading Entertainment managing director Wayne Smith, of Melbourne, eats popcorn in the new premium ''dine-in'' cinema in Dunedin yesterday. Photo by Gerard O'Brien
The sense of space is striking on stepping from the Octagon into the lobby of the new Reading Cinema.

The coldness of the expansive grey concrete walls is softened by a scattering of suspended lights and large dining booths surrounded by warm wood.

Reading Entertainment managing director Wayne Smith, of Melbourne, said he expected people to come to the cinema not only to watch movies but to eat and drink.

He has been in Dunedin this week preparing for the opening of the cinema to the public today and the gala opening last night - a free screening of Mrs Brown's Boys D'Movie to a full house.

The six-cinema complex seats 750 people, about 30% fewer seats than when Hoyts occupied the building last year.

Of the cinemas, four were ''normal'' and two were premium ''dine-in'' cinemas with plush seats covered with deep purple faux leather with two drink holders and a swivel table, Mr Smith said.

''You can take your meal and drink in there. The normal cinemas you can only take your drink and popcorn in.''

The premium menu included food such as hamburgers and chips cooked to order in a new kitchen behind the ticket counter.

The food would be bought from the ticket counter and taken to the premium cinema by the customer, he said.

The opening date was about two months later than expected because of extra time needed for earthquake-strengthening work.

''You've got to put in double the amount of timber than you used to,'' Mr Smith said.

About 500 people applied for cinema jobs and 30 staff, a mix of fulltime and part-time, were hired.

The $10 admission cost for a normal cinema ticket would be permanent, he said.