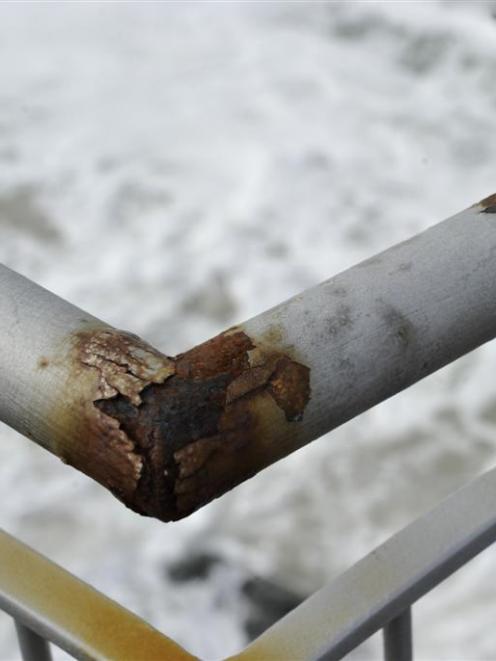 It is the second major repair since the esplanade was given its new look in 2004.

The handrail and fence beside the beach is being repaired after serious corrosion of the steel and wood design, with the Dunedin City Council's design requirements for the facility found wanting.

Water was also getting between the wood handrails and metal base plate, with both staying wet and corroding.

In defence of the facility, Mr Matheson said anything built in the hostile environment of the beach would struggle to last long.

The contract to "refurbish" the handrail was being completed by Dunedin company Zeal Steel.

Last financial year, the council had a 200m section from the St Clair Salt Water Pool repaired under a different contract, and the latest contract would complete the work to the end of the facility, past the South Coast Board Riders clubrooms.

Mr Matheson said the company was removing the fence in panels, sand-blasting and repairing what it could, and then putting the panels back in place.

It was possible to salvage half to three-quarters of the wooden part of the handrail.

The Esplanade was "a very hostile environment", and any structure would have a limited life.

"But we would have hoped for two or three more years. That's not the case, so we just have to do what's right."

The work started about three weeks ago, and was expected to be finished by the end of July.

The designers of the $6 million sea wall came under fire late in 2004, following storm damage to an access ramp.

Bolts at either end of a section of the ramp designed for disabled access broke after rocks became wedged underneath and lifted the panel.

Design consultant Duffill Watts and King and construction company Naylor Love agreed to strengthen and repair the ramp and staircase following the event at no cost to the council.