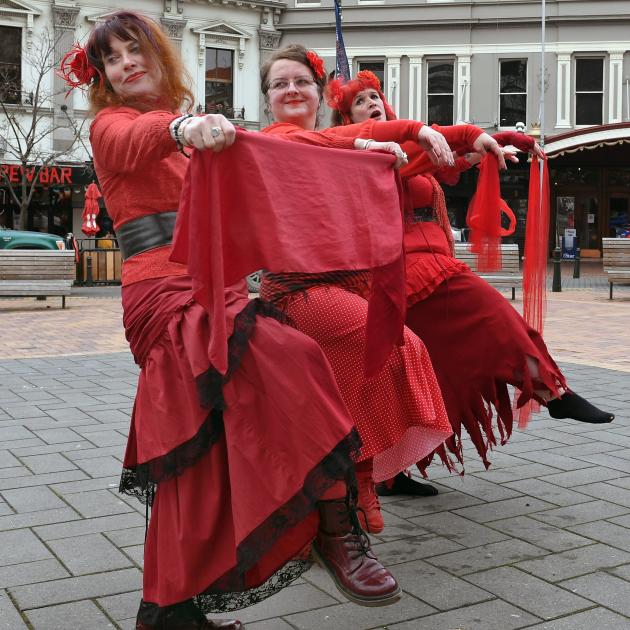 Preparing for the ‘‘Most Wuthering Heights Day Ever’’ event in the Octagon in Dunedin yesterday are (from left) Donna Demente, of Oamaru, and Sandra Muller and Mandy Mayhem-Bullock, both of Waitati. PHOTO: STEPHEN JAQUIERY
Don't be surprised if someone sheds their clothes and changes into an all red outfit in Dunedin today.

That tends to happen during the ‘‘Most Wuthering Heights Day Ever’’, Mandy Mayhem-Bullock says.

The event, held at locations around the world, sees participants recreate the music video for Kate Bush’s 1978 song Wuthering Heights.

About a hundred people wearing all red clothing are expected to gather in the Octagon, at 11.30am, to dance Bush’s signature moves.

Ms Mayhem-Bullock, who is the organiser, said participants showed up to support each other and dance the winter blues away.

The lyrics ‘‘Heathcliff, it’s me Cathy . . . let me in’’ captured what the day was also about, which was encouraging others to talk about their feelings.

Heathcliff is a fictional character in Emily Bronte's 1847 novel Wuthering Heights, which Bush’s song is about, who is often regarded as the tortured antihero.

‘‘We are reaching out to all the Heathcliffs out there,’’ she said.

The money raised from today’s event will be donated to Wellness, Empathy, Kindness Aotearoa.

Ms Mayhem-Bullock said Dunedin had been the southern-most location for the event for three years.

‘‘It is not exactly the romantic, wily, windy moors, but we choose the Octagon because we want to bring vibrancy and complete accessibility.’’

There would be plenty of space for prams, wheelchairs, and walkers, she said.

‘‘We have 3 year olds to 90 year olds participating.

In previous years, even those who had just come to spectate could not resist the energy of the mass performance.

‘‘A few people just shed their clothes and put on the red clothes from our dress up box, and we encourage that,’’ Ms Mayhem-Bullock said.