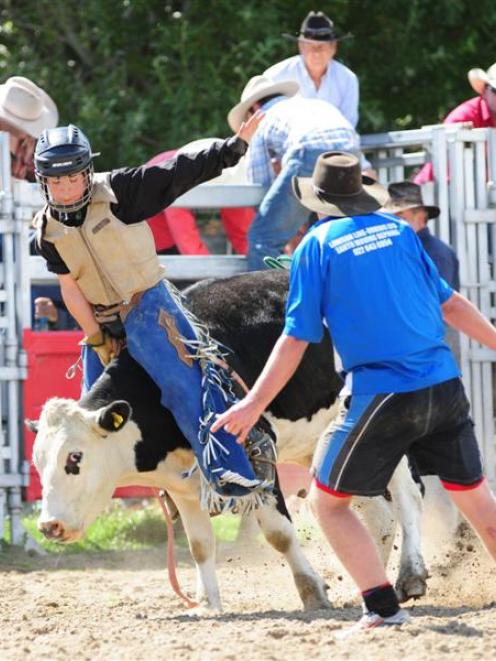 Sam Church in action at Outram last year. Photos by Craig Baxter.
It has been a tough year for the Church family, but a highlight has been Sam Church's selection to represent New Zealand in steer riding.

The Palmerston 13-year-old has been selected in the transtasman high school rodeo championships team, which will travel to Queensland in October.

Sister Paige competed in the barrel-racing in the same championships in 2010 and 2011.

Sam, who was selected on the back of his form in the 2011-12 rodeo season, had his first sheep ride when he was aged about 3. He won the New Zealand junior steer-riding title last year, which was a "pretty big thing".

As the son of champion horseman and Otago rodeo identity Dion Church, who died last September, his talent comes as little surprise.

However, it is also cause for concern for his mother, Christine Bain. 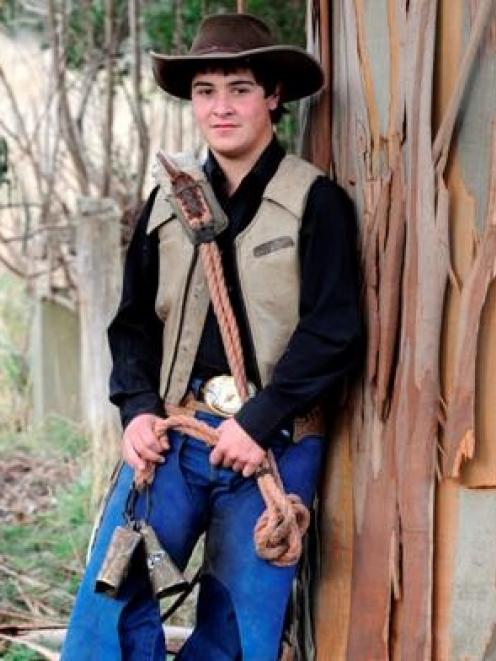 Sam Church, of Palmerston, who will represent New Zealand in the junior steer ride event at three Australian rodeos in October.
"For Sam, the way things have panned out, this could be his one and only chance to get in the team - rodeo is not a cheap sport. Dion died last year and, obviously, that changes things for the family.

"The main thing for me at the moment is to come up with the funds to get Sam there. You do what you can to get your kids to where they want to go," she said.

The two-week trip will cost about $2000 and the family is looking at fundraising events and seeking sponsorship.

She is proud of how Sam and his three sisters have coped since their father died.

"He has just overcome a huge couple of years and is still on the right side of the tracks. He could have just shut up shop and said 'bugger it all'. I think for kids they have been through quite a bit. I think rodeo actually gives them direction. It's a sense of self worth, really."

Sam was looking forward to competing in the steer-riding, which involved being strapped on to a steer and holding on for 8 seconds.

"You get a good adrenaline rush," he said.

He also hoped he would be able to carry on in the sport he loved.

"I'll probably do whatever I can and do the best I can, but if not, then oh well."

Clint McAughtrie (16), of Omarama, a pupil at John McGlashan College in Dunedin, will also travel to Australia to compete in the bull ride.