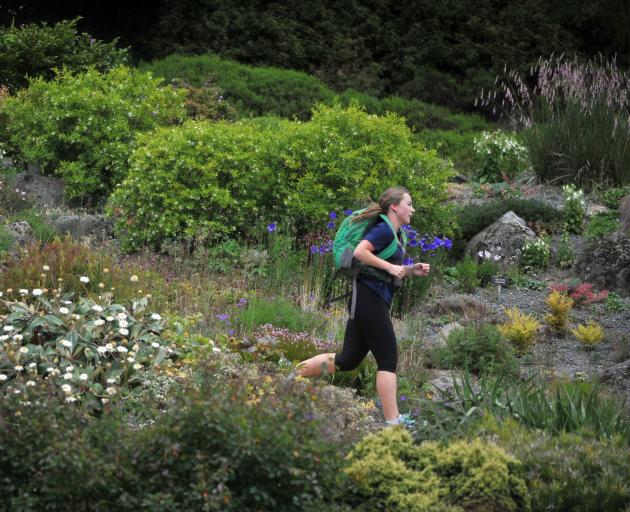 Dunedin nurse Diana Watt says she runs to and from work at Dunedin Hospital to maintain fitness and balance in her life. Photo by Christine O'Connor.
Almost half of New Zealand women who exercise regularly could be risking their reproductive and bone health by not eating enough to replenish the energy they expend, a University of Otago study suggests.

Of the 109 participants interviewed by University of Otago department of human nutrition researchers, 49 (44%) were found to be at significant risk of low energy availability (LEA) or at increased risk of becoming so.

Study lead author Dr Katherine Black said when the body did not have significant amounts of energy it tried to conserve it through hormonal adaptations.

Such adaptations could have damaging effects on women's health.

''Physical activity, sport and exercise are undoubtedly an important part of a healthy lifestyle.

''However, when energy expenditure during exercise significantly exceeds energy intake this can cause problems, particularly for bone health and reproductive health.''

Participants of the study were all non-elite athletes who did at least 150 minutes of moderate intensity activity per week, 75 minutes' vigorous intensity exercise, or a combination of the two.

Energy intake and expenditure was difficult to assess, so researchers looked for symptoms of LEA.

They included irregular menstruation and bloating.

For every one hour increase in exercise per week, study participants' chances of developing LEA grew significantly, Dr Black said.

There was also a strong link between the number of days women took off due to injuries and incidence of LEA.

The findings had surprised researchers and highlighted the need for women to find a balance between exercise and diet.

''We were slightly surprised that the prevalence of LEA was so high ...

''Given the high proportion of recreational athletes at risk of LEA, the links we have seen with injury, and previous research showing the negative long-term health consequences, we believe it is important to raise awareness of LEA and its potential serious health consequences.''

Exercising to lose weight was fine so long as a woman was not losing significant amounts of weight within a matter of weeks, Dr Black said.

Dunedin nurse Diana Watt (26) said she was not surprised to hear of the negative consequences of not replenishing expended energy.

Miss Watt ran for about 40 minutes each day and ensured her diet gave her enough energy to stay healthy, she said.

Women could help avoid LEA by ensuring they had a varied diet, ate carbohydrates before and after exercise and did not skip meals.

The research appeared in the most recent issue of the International Journal of Sport Nutrition and Exercise Metabolism.