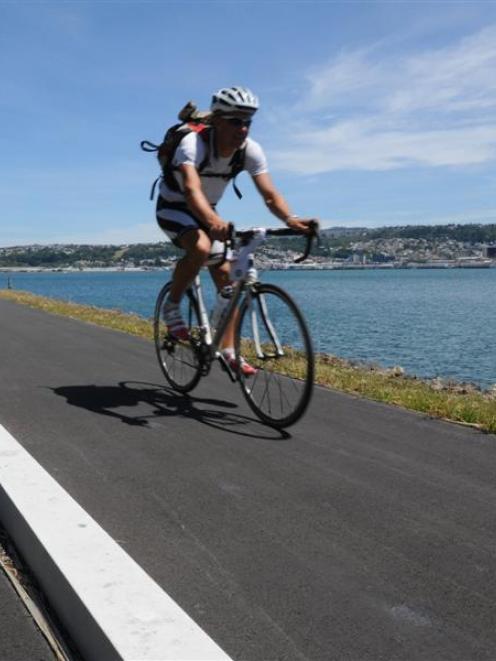 German tourist Michael Klemz uses the shared path on an improved section of Portobello Rd in 2012. Cyclists could be able to cycle on the path to Macandrew Bay if councillors agree to change the construction schedule for the shared path on the rest of the road. Photo by Jane Dawber.
Feedback over the past year has prompted the Dunedin City Council to review in what order it widens sections of Otago Peninsula roads to fix sea walls and add shared paths for cyclists and pedestrians.

The remaining 13.1km is planned to be done over the next 12 years at a cost of $27 million, subject to funding - the New Zealand Transport Agency is expected to subsidise the work by up to 65%.

The capital work is built into the council's long-term budgets, although staff have indicated several sections can now be done within existing budgets.

Under the present agreement, determined in consultation with the community in 2005-6 and which focuses on making the improvements in the built-up areas first and then linking them, sections of Harington Point Rd are programmed to be done this year and next.

The remaining sections linking the greater metropolitan area to Macandrew Bay are not programmed to be completed for another six years.

However, council staff say feedback from locals and other interested parties over the past year has indicated a desire to complete the Dunedin to Macandrew Bay section earlier.

Transportation staff have requested direction from councillors, who will discuss the matter during their 2014-15 annual plan discussions this week, on whether to change the sequence of work.