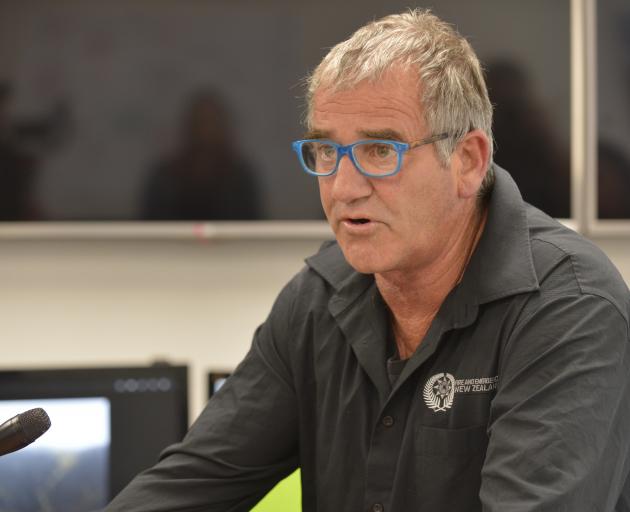 Fire and Emergency New Zealand incident commander Graeme Still fronts a media briefing yesterday. PHOTO: GERARD O'BRIEN
A rural fire officer who has helped fight bushfires in Australia says he has never attended a blaze as fast moving as the one near Middlemarch - describing the fire ground as "like a warzone".

The 4664ha fire began in Te Papanui Conservation Park on Saturday morning and spread throughout the day and night to adjoining land owned by the Dunedin City Council, and also into the Clutha district, threatening several buildings and a windfarm.

Gareth Bowen, responsible for helping plan the strategy for combating the fire, arrived on the scene within the first two hours and said it was "pretty crazy".

"I've never seen it move so fast, and I've been to countless [fires] within the country, and overseas," he said.

"It was eye-opening to see how that fire was behaving - it was pretty extreme."

The scale of the fire was "something that you don't tend to see in this part of the country very often", he said.

After crews had been battling the blaze for five hours, Mr Bowen set foot on the end of the fire ground closest to the windfarm, which he said was "like a warzone", and "very eerie, very smoky".

On Saturday night crews were stood down, as it was too dangerous to continue to fight a fire in darkness.

"There's nothing we can do except watch it." 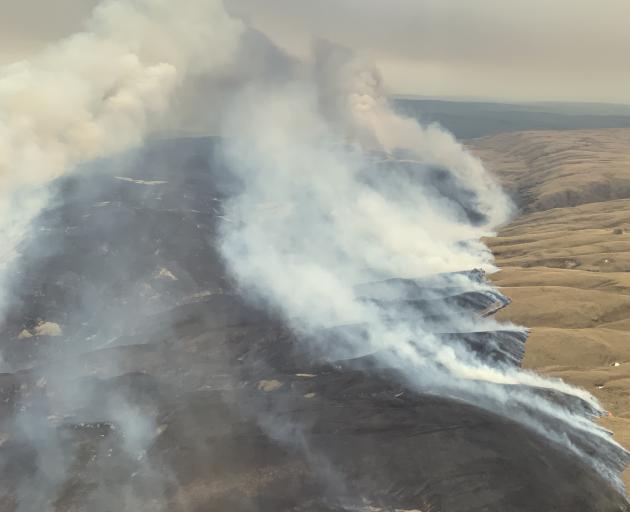 The fire near Middlemarch spread rapidly in hot, windy conditions, burning through tussock and scrubland. Photo: Supplied
Fortunately, in the early morning the landscape had changed drastically due to the rain, which "did a really good job" extinguishing the blaze.

The smoke and dust from the Australian bushfires during the weekend made for challenging conditions for helicopter pilots, causing a yellow sky and some low cloud, particularly on Saturday afternoon.

Helicopters Otago chief pilot Graeme Gale said combined with the high winds "the conditions for those flying were pretty extreme".

"The rain today has come as a huge relief for us and everyone involved."

His son, pilot David Gale, said the fire was largely out first thing yesterday morning, the last time he was able to go up, barring the odd smouldering pine or patch of tussock, he said.

He was at the scene about noon on Saturday, and was also struck by the speed at which the fire travelled during the day.

Despite firefighters thinking the waterway in the area would slow it down, it "seemed to have jumped the Deep Stream", he said.

Fortunately, water sources were close at hand, including tarns, deep holes and a nearby pond. One of his tasks was to protect a crib threatened by the fire, dampening down the flames around the building.

Otago district principal rural firefighter Graeme Still said firefighters were tired after a big week of fires for the region, and hoped for "a bit of a reprieve".

"Groups of fires like these happen about once every five years and are a big effort."

Mr Bowen said he would return to the scene today, to help co-ordinate the next stage of the operation.