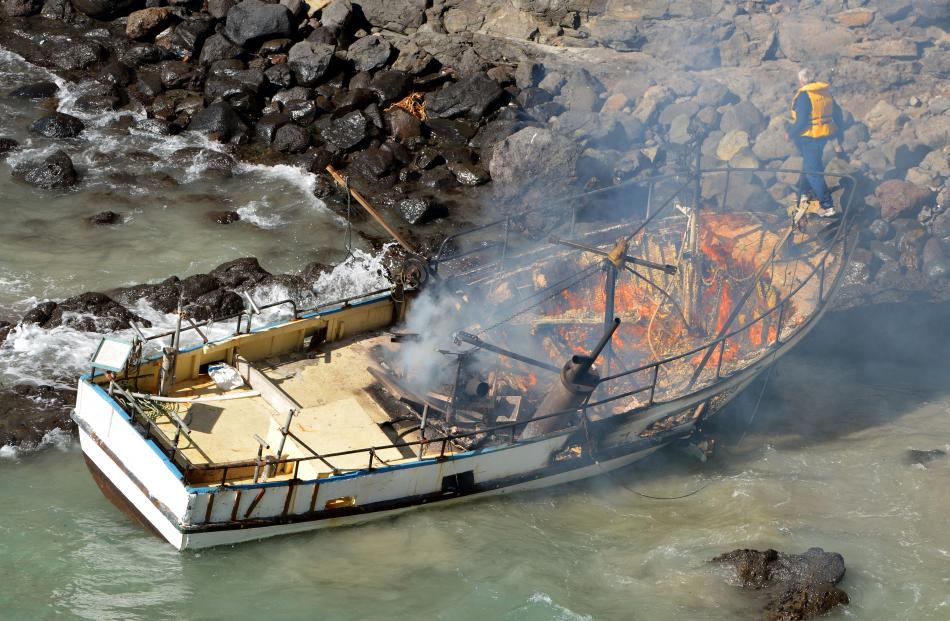 Smoke rises from the burning boat. Photos by Stephen Jaquiery. 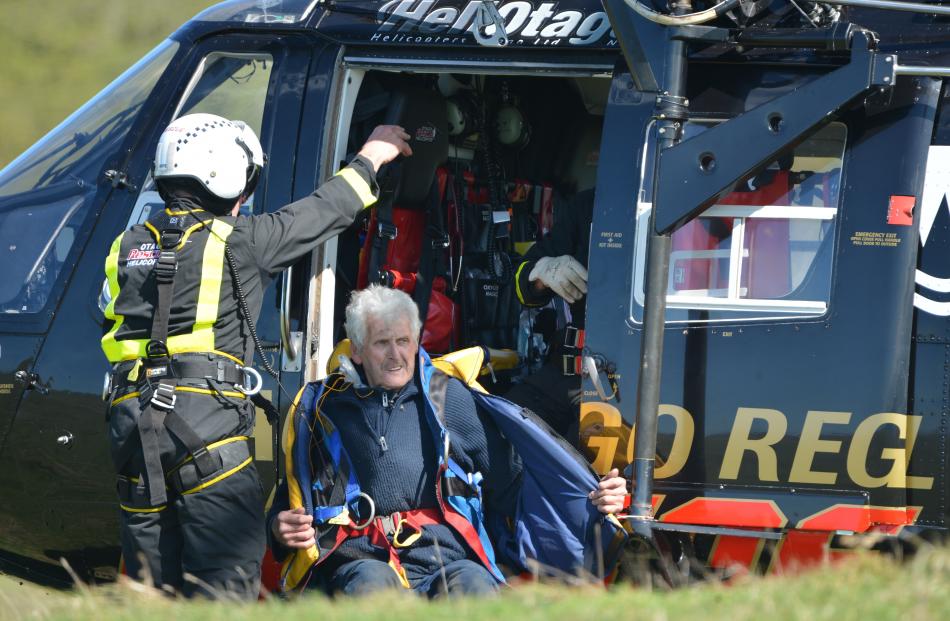 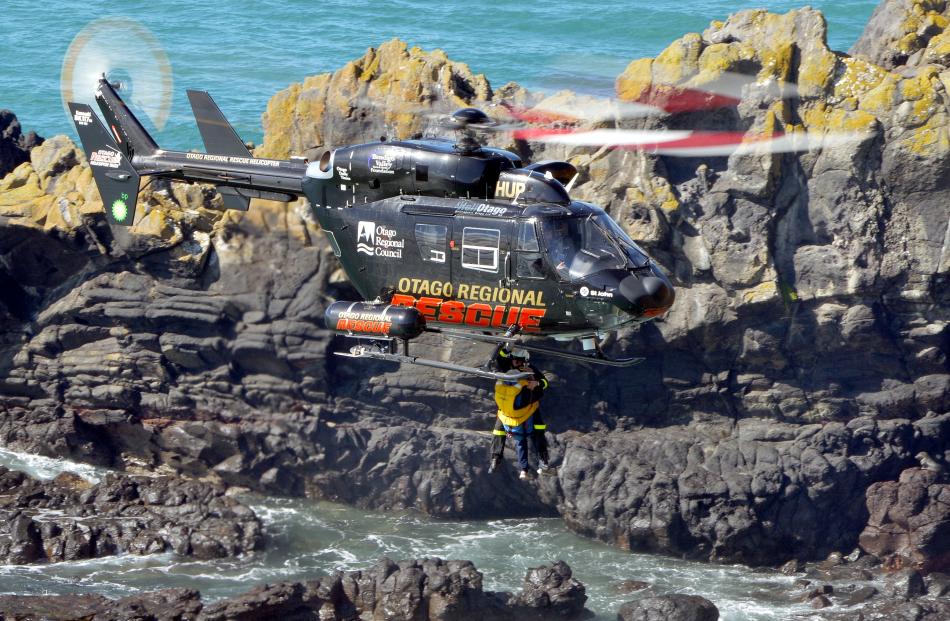 A rescue helicopter hovers above the rocks.

A Port Chalmers fisherman is in shock after jumping from his ''pride and joy'' fishing boat after it caught fire.

Warren Lewis, a recreational fisherman and marine search and rescue adviser, called for help after noticing the fire in the engine of his boat Renegade while fishing off Heyward Point just before noon yesterday.

His call sparked a rescue that involved police, firefighters, the coastguard and surf life-savers.

The bay where he ran aground is surrounded by steep cliffs, thwarting a land rescue, and he was winched to safety by the Otago Regional Rescue Helicopter before being taken to Dunedin Hospital suffering from cold and smoke inhalation.

Mr Lewis' friend and fellow marine search and rescue adviser Rowan Leck visited him in the emergency department and said he was ''shocked'' and ''very cold''.

''He got completely soaked when he waded ashore and sat with the seal pups until [the helicopter] arrived.''

He was unsure exactly how the fire started but noticed some ''funny noises'' coming from the engine just as he was putting his line out to fish 100m offshore from Heyward Point.

''He turned around and saw unusual smoke coming from the funnel. He opened the hatch of the engine room and it burst out in flames.''

He then sent out a distress signal, drove the boat ashore and jumped over the side.

There was no hope of saving the boat once the fire started.

He was ''very well prepared'' and had a rescue beacon and handheld radio stored in a watertight container, which he took with him when he waded ashore.

He believed losing the boat, a decommissioned fishing vessel that was his ''pride and joy'' and under-insured, was yet to sink in yesterday.

He counted himself lucky he was close to shore when the boat got into trouble, as survival time after jumping in to cold water was ''not that great, even on a fine day like this'', Mr Leck said.

''He said his cabin was filling with smoke and he was going to jump overboard,'' Mr Jensen said.

Mr Jensen was later told that three nearby fishing boats were heading to the scene ''fast as they could'' to help.

Matthew Lewis, skipper of the fishing boat Truby King, which was nearby when Mr Lewis requested help, said the boat was run aground and ''fully ablaze'' when they got there.

He could see Mr Lewis had escaped from his boat but Truby King and two other fishing boats that arrived later waited until the helicopter turned up.

Port Chalmers Volunteer Fire Brigade station officer Cory White said it took about an hour to extinguish the blaze with a portable pump after he was taken to the isolated spot by the coastguard and surf life-saver IRBs about 2.30pm.

The boat was almost completely destroyed, with only the outer shell and a little bit of internal structure left.

The wreck was tied in place with anchors and ropes. Mr White believed the plan was to look at salvaging options today.

Dunedin Search and Rescue co-ordinator Sergeant Nathan White said he was ''more than happy'' with the rescue yesterday.

The rescue was in a remote location and it was a ''challenging environment'' to deploy resources to, he said.