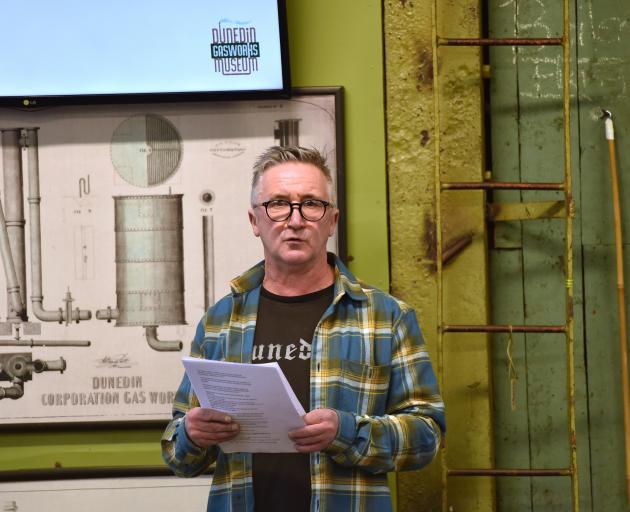 Heritage building developer Lawrie Forbes gives a talk on the Scribes building demolition at the Gasworks Museum annual meeting yesterday afternoon. PHOTO: GREGOR RICHARDSON
The final chapter for the former Scribes bookshop site is coming to a close, with demolition of the North Dunedin building due to be completed today.

The work had been halted in April because development company Dayniel Ltd did not have a building consent, which was necessary because of a party wall with the adjoining building at 544 Great King St.

The owner of the neighbouring property, heritage building developer Lawrie Forbes, said he had now signed an agreement with the developer to allow the party wall to be pulled down.

A party wall is one built between adjoining buildings on two separate properties.

Mr Forbes revealed his acquiescence to the wall’s destruction during a talk at the AGM of the Dunedin Gasworks Museum yesterday afternoon.

The demolition was now imminent and "by this time tomorrow that building will be no longer".

Mr Forbes’ talk focused on the demolition of the Scribes building from his perspective and highlighted the emotional toll the process had on him.

He had purchased the property with the intention of fitting out the ground floor as a new home for the North Dunedin branch of the Labour Party.

However, the commencement of the demolition and the unresolved situation with the party wall had thrown his plans into disarray.

"[The night the demolition was halted was] the worst sleep on record for Lawrie Forbes. I was feeling for the first time in my life I was about to fail terribly."

Telling his side of the story had been "a bit of a healing, to tell the truth".

At the time of the stoppage of demolition there had also been questions around whether the appropriate archaeological authority was obtained to knock down the pre-1900-constructed building.

Conditions included contractors being briefed about what to do if they come across archaeological evidence at the site, and stoppage of work in the event of artefacts being found.

People in and out all day long.