The only good thing about living in a war-torn country is that it teaches you to be resilient, Ghusoun Fashwel says.

"We used to live in a war city — shooting, bombing, kidnapping every day."

So when the Syrian mother of four returned from a seven-minute visit to the supermarket on Monday night to find her Mosgiel house on fire, she was just relieved her family was not inside.

Living in an environment with death and destruction all around had made them stronger and more adaptable, she said.

The fire was believed to have started on or near an oven in the kitchen, and spread to the range hood.

Within minutes, it had engulfed much of the wooden house, destroying all but the clothes on their backs, she said.

"We are not sorry for anything we have lost, but we are very sorry for the house." 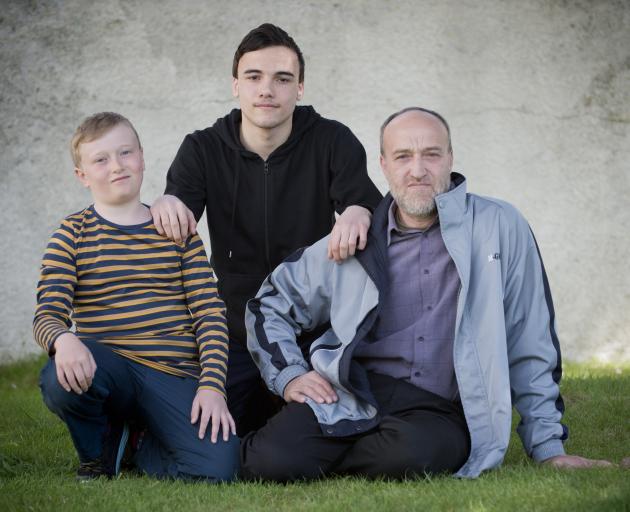 Fashwel family members (from left) Anas (10), Abdel Karim (16) and their father Walid are putting on brave faces and getting on with rebuilding their lives, after their family home burnt down in Mosgiel earlier this week. PHOTO: GERARD O’BRIEN

She said they had been in the Oban St house for about two years, and her husband Walid was particularly upset because he had spent much of his spare time painting and renovating to make the Kainga Ora house their "home".

The family said they were still quite shocked by the ordeal yesterday.

Eldest daughter Farah (23) said she was upset with firefighters at the scene because she was watching all the hard work they had done to build a new life, go up in smoke.

"I went to the fireman and I pushed him down and I told him if you don’t start to get the water in, I will get it and I will wet it myself."

She believed they were slow to arrive.

However, she had since come to understand the Mosgiel Fire Station was manned by volunteers at night, and it took longer for firefighters to attend.

The day was doubly distressing for the family because Mrs Fashwel’s mother died earlier in the day.

Mrs Fashwel said while rebuilding their lives would be difficult, it was being made easier by the overwhelming support of the community.

She was tearful when she said neighbours had been emotionally very supportive, providing food and clothing, and people from as far away as Auckland had called to offer help.

"I want to thank everybody who give us support. I appreciate what firemen did for us.

"I thank every Kiwi people, even in Auckland and Wellington, who have asked about our condition."

The family is staying at a Dunedin motel at the moment, and it was hoped they could be in a new house within the next month.